SAG-AFTRA recognizes directors, actors and more with Patron of the Artists Awards 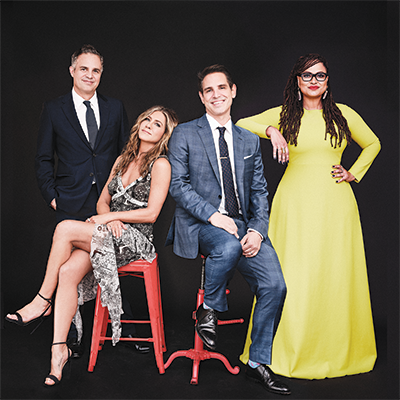 From left to right, Mark Ruffalo, Jennifer Anniston, Greg Berlanti and Ava DuVernay were all recognized for their roles in their industry at the SAG-AFTRA Patron of the Artists Awards. (photo courtesy of Maarten de Boer/SAG-AFTRA Foundation)

The SAG-AFTRA Foundation’s fourth Patron of the Artists Awards honored industry leaders and artists at the Wallis Annenberg Center for Performing Arts in Beverly Hills.

The benefit recognized showrunner Greg Berlanti and director, writer and producer Ava DuVernay with the Patron of the Artists Awards, which commends their commitment to championing the careers of performing artists. Producer and writer Norman Lear presented the award to Berlanti, and actor David Oyelowo presented to DuVernay.

The Artists Inspiration Awards were given to performers who use their platform to advance humanitarian and philanthropic causes. Jennifer Aniston received her award from her “Friends” co-stars Courtney Cox and Lisa Kudrow. Mark Ruffalo was presented with his award by inaugural SAG-AFTRA Foundation Artist Inspiration Award-recipient Leonardo DiCaprio.

The evening included musical direction by eight-time Grammy and Emmy-winner Gregg Field, with an opening performance by Cynthia Erivo, who sang “Stand Up” from her film “Harriet”; Chrissy Metz who sang “I’m Standing With You,” an original song from her feature film “Breakthrough”; singer Wé McDonald, who sang “Don’t Rain on My Parade” from the motion picture “Funny Girl”; and Grammy Award-winning artist Patti Austin, who sang “You’ll Have to Swing It” from the film “Rhythm on Stage.”