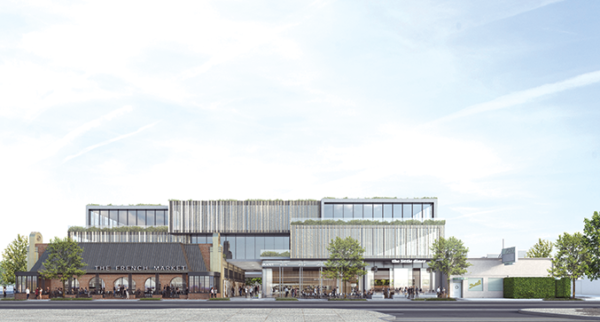 The French Market project is now planned to be three stories tall, not four. (rendering courtesy of Faring)

On Nov. 25, the West Hollywood Historic Preservation Commission re-approved a commercial project that includes the French Market building at 7985 Santa Monica Blvd., as developer Faring made significant changes to the proposed design.

The project was first approved on Aug. 26 as a four-story commercial project, but the revamped design has been reduced to three stories. Additionally, the height of a paseo between the French Market building and the new structure has been increased, allowing for more of the French Market’s exterior to be visible along the walkway.

“We were honored to win your approval last August, and as a further gesture to our neighbors in the community, we’ve taken it one step further, taking that fourth story off,” said Jake Stevens, director of community engagement for Faring.

The commission voted 5-2 to approve the project’s changes. Commissioners Edward S. Levin and Gail Ostergren, the two votes against the project in August, again voted against approval, reiterating their concerns that while the façade of the building is preserved, the interior is not. In August, Levin called the plan “a backward façade-ectomy.”

However, nearly every commissioner, including Ostergren and Levin, praised the redesign as an improvement over the plan that was approved in August, as did all 12 public speakers and two public comment cards that were submitted to the commission.

Because the property is already zoned for a three-story building, the project will not have to go before the full City Council for approval. Instead, the more than 69,000-square-foot, nearly 50-foot-tall building will go before the West Hollywood Planning Commission. It is expected to be considered on Dec. 5.

If approved, the project will create space for a variety of commercial uses, including restaurants, bars, retail and office, while retaining the structure of the French Market, which was famous as a gathering place and safe space for members of the LBGT community in the 1970s and 1980s.