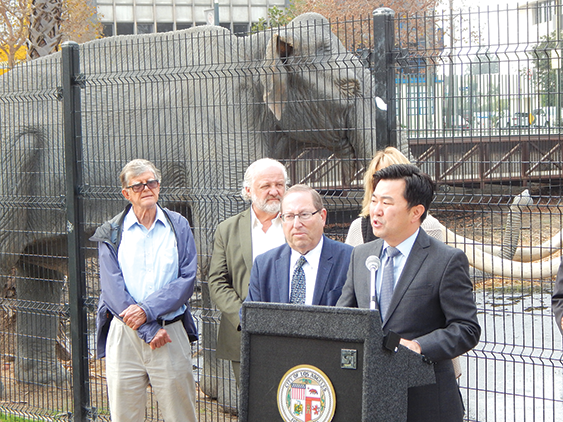 Los Angeles City Councilmen Paul Koretz, 5th District, and David Ryu, 4th District, joined environmental activists and representatives of indigenous peoples at the La Brea Tar Pits on Nov. 14 to denounce the destruction of the Amazon rainforest in Brazil and announce a motion calling for the city to cease doing business with companies with ties to rainforest destruction.

The announcement coincided with a press conference in New York City on the same day in which municipal leaders there also condemned the Brazilian government’s allowance of deforestation. New York City leaders also called for ties to be cut with companies involved in what they described as an environmental catastrophe in the making.

The officials on both coasts said an increase in demand for meat has prompted companies in Brazil to cut down the rainforest at an alarming rate to make way for cattle grazing. They also cited an increase in fires in the rainforest caused by illegal activity and stories about indigenous people being murdered for opposing rainforest destruction as reasons for the urgent need to address the issue. Koretz and Ryu said the survival of the Amazon rainforest is critical to reducing the impact of climate change, as its trees absorb a large amount of carbon dioxide emissions.

“Our two largest cities [are calling] for the other 35,000 cities in the United States to join us in our boycott of Brazil, its cattle industry and the reckless corporations profiting from deforestation, murder and climate madness,” Koretz said. “If we lose the Amazon, we lose our critical carbon sequestration defense, and we lose the climate fight, period. Let’s see if by year’s end, our entire country of cities can join us and show the Brazilian government how much we honor, respect and vitally need the Amazon rainforest and its indigenous peoples for our continued well-being.”

“As consumers, as cities and as global citizens, we have a choice. We can continue to feed an industry that is destroying the Amazon rainforest and its indigenous peoples, or we can stand together and fight for it,” Ryu said. “There is no back up Amazon rainforest. The choices we make today will decide the fate of this incredible ecosystem, and the fate of our atmosphere as a whole. I’m proud to be a part of this global movement to save the one and only Amazon rainforest.”

The councilmen co-authored the motion calling for the City Council to break ties with companies with connections to rainforest destruction. The motion was introduced on Nov. 15 and is awaiting scheduling to be heard in council committees.

Koretz said he did not know the number of companies potentially associated with rainforest destruction with ties to the city, which is one of the things the motion is intended to determine. He added that the action by the City Council, and that of New York City officials, sets an example for others to follow.

“It would be great for Brazil to take the economic impact into account,” Koretz said. “We are trying to lead a boycott of Brazilian products, and we are hoping the two largest cities will get the other 35,000 cities to join us.”