Petersen goes back to the future with electric vehicles 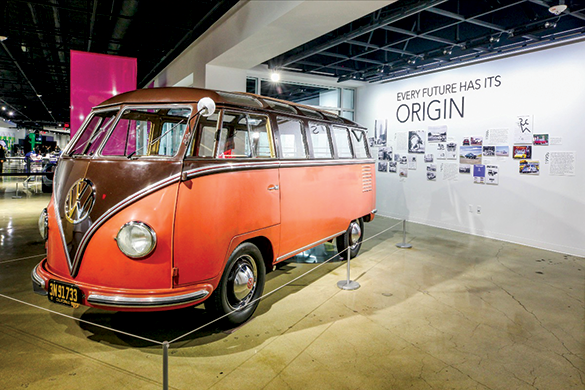 The Type 2 DeLuxe Microbus, also known as the Transporter, was first imported into the U.S. in 1952. Volkswagen’s planned ID.BUZZ will build upon the tradition of the Transporter line providing a new interpretation of the 1950s classic. (photo courtesy of Petersen Automotive Exhibit)

The Petersen Automotive Museum partnered with Volkswagen to open “Building an Electric Future,” a brand-new exhibit that explores the manufacturer’s plans to become the foremost producer of electric vehicles through three all-electric ID. series cars.

Located in the Production Gallery, “Building an Electric Future” consists of five rooms that incorporate interactive features and showcase how Volkswagen’s MEB modular electric vehicle platform is engineered and how ID. electric vehicles are assembled.

“Through our partnership with Volkswagen, we are exploring the impact an electrified future will have on a local and global scale,” said Petersen Executive Director Terry L. Karges. “We are thrilled to collaborate with the manufacturer to present ‘Building an Electric Future.’ The exhibit offers visitors an interactive behind-the-scenes look at how the world’s largest automaker is paving the way for the future of mobility.”

The new ID. Space Vizzion, which was unveiled at the exhibit’s opening reception on Nov. 19, is on display to the public at the LA Auto Show at the Los Angeles Convention Center through Dec. 1. “Building an Electric Future” is on display at the museum through September 2022.