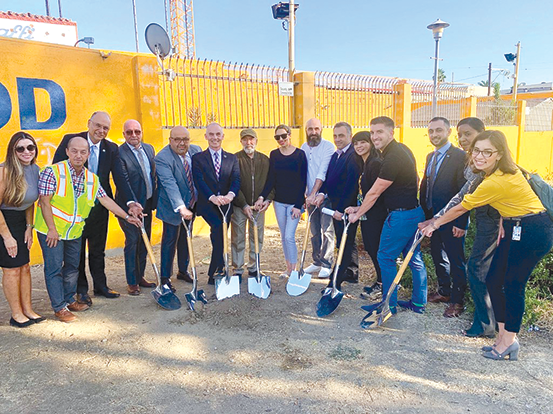 On Oct. 25, the city obtained the permit from CalTrans to begin work on the small parcel of CalTrans property at Hollywood Boulevard, near the 101 offramp. The groundbreaking represents the first step in a six-month construction process on the gateway, beginning with the landscaping and site preparation of the property.

The artists of the Atanian Art Center will then assemble the “tufa,” a specific type of stone ubiquitous in Armenia. The stone was imported from Armenia and will be chiseled on-site by the artists.

“For decades, Little Armenia has been a gateway to immigrants of Armenian descent coming to Los Angeles, and this art installation will serve to not only celebrate our diverse cultural heritage but also acknowledge the amazing contributions of one of the largest Armenian populations anywhere in the entire country,” O’Farrell said.

“This years-in-the-making project would not have been possible without the hard work and dedication of my team, the Department of Cultural Affairs, the Bureau of Street Services, CalTrans, the City Attorney’s Office and the Atanian Art Center. The collaboration between each of these entities over the last several years has been instrumental in leading us to where we are today,” O’Farrell added.

Construction is expected to be completed by summer 2020.