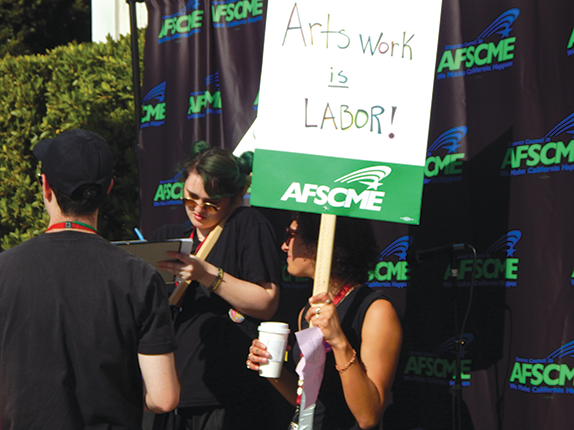 AFSCME, which assisted the Marciano Art Foundation unionization effort earlier this month, is working with the MOCA employees as well. (photo by Cameron Kiszla)

On Nov. 22, workers at the Museum of Contemporary Art announced their intention to form a union, the second such push at a Los Angeles art museum in a month.

Employees at the Marciano Art Foundation announced their intentions to unionize with the American Federation of State, County and Municipal Employees earlier this month, and all 70 workers were laid off a few days later.

At MOCA, more than 50 employees submitted to museum officials a request for their union to be recognized, said Carlos Vellanoweth, senior organizer with AFSCME District Council 36. Representatives for MOCA did not respond to interview requests, though after the union was announced, MOCA management is reported to have released a statement that said, “While we respect the right of employees to decide whether or not they wish to be represented by a union, we do not believe that this union is in the best interest of our employees or the museum.”

Vellanoweth also worked with the Marciano employees on their union push and said the MOCA workers reached out to AFSCME shortly after the Marciano workers began organizing.

“It’s not that we were trying to target them. The workers actually approached us,” Vellanoweth said.

Brenda Escobar, a visitor engagement lead at MOCA and union supporter, said a majority of the museum’s approximately 120 employees are in support of the union, and they work in a variety of departments.

“Some of us are full time, others are part time, but [pay] is very low and it is comparable to the Marciano and other museums in L.A. as well,” Escobar said.

Ace Ubas, a retail coordinator at MOCA and union organizing committee member, said the union push has support across all of the museum’s departments.

“I feel that supporting the union does a great job of keeping the institution accountable in terms of taking care of its workers, who are the first faces that you encounter when you walk into the museum and the first people who you interact with,” Ubas said.

Vellanoweth said workers at other museums are planning potential unions, though he declined to name the institutions.

“I think that would be amazing if that were to happen in every museum, in L.A. especially. That’s something that has been lacking here, considering L.A. is one of the most expensive places to live,” Escobar said.

Ubas said MOCA’s employees want to “help establish this movement for museums in Los Angeles” and to encourage institutions to look after their employees the way they look after the public.

“The museum is going free to the public on Jan. 11, and I think that’s an amazing policy to make the museum more accessible not only to the community, but anyone who comes to the city or anyone that has a passion for art. But we want the museum to be more accountable in taking care of its own people,” Ubas said.

Man with machete shot and killed by police