Man with machete shot and killed by police 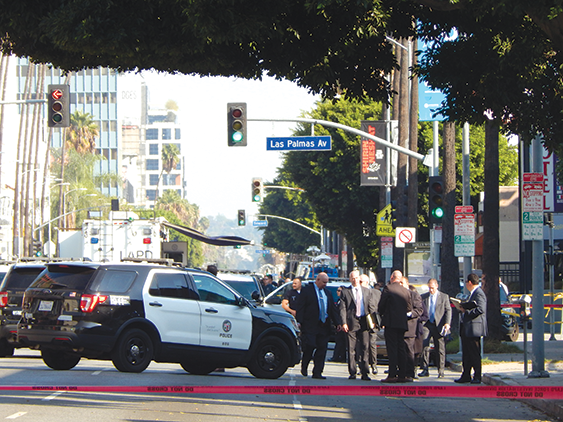 Sunset Boulevard was closed for hours as Los Angeles Police Department detectives investigated an officer-involved shooting in which an alleged robbery suspect was killed. (photo by Morgan Keith)

The male suspect was taken to a hospital and later died. He was not identified, pending the outcome of a police investigation.

Officers received reports about the armed suspect at approximately 11:30 a.m. after he allegedly robbed employees at an AutoZone store in the 1300 block of Highland Avenue, Ramirez said. The suspect then proceeded north on Highland Avenue on foot and carjacked a driver waiting in the drive-thru at a Chick-fil-A restaurant, Ramirez said. Officers arriving at the scene attempted to block the suspect with their vehicles, and he crashed the stolen car into the police cruisers, jumped out and fled on foot with a machete, Ramirez said.

“The officers gave chase and in the process, fired less lethal options, and were ultimately involved in an officer-involved shooting,” Ramirez said. “The suspect was struck by gunfire and transported to a local hospital, where he was pronounced deceased.”

Video taken by bystanders in the area shows the suspect running toward one of the officers, who attempted to run away but the policeman fell in the street just prior to the officer-involved shooting. It was unclear how many officers fired at the suspect. The officer who fell was not identified.

“He sustained minor injuries on his elbow and knee but was treated on scene and released,” Ramirez added. “The machete was located on scene, and it was described as a foot to a foot-and-a-half long.”