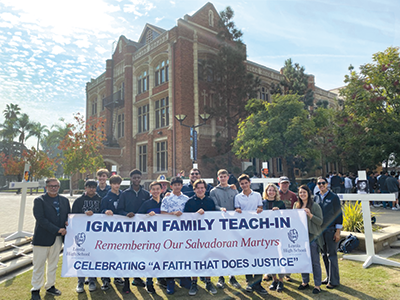 From Nov. 16-18, nearly 2,000 individuals including a delegation from Loyola High School of Los Angeles gathered for the 22nd annual “Ignatian Family Teach-In for Justice” in Washington, D.C.

Initiated in 1997, the “Teach-In” commences yearly in mid-November to commemorate the Jesuit martyrs of El Salvador. Six Jesuit priests, their housekeeper and her teenage daughter, were murdered on Nov. 16, 1989, for speaking out against the country’s tumultuous civil war. Through work with the poor and marginalized, the Catholic Church and its leaders, including the Jesuits and now-Saint Óscar Romero, sought to address the long history of inequality and injustice in the country.

Each year, the event connects Catholic faith and justice, addressing timely issues through two days of speakers, breakout sessions and networking opportunities. Known as the largest annual Catholic social justice gathering in the United States, attendees come from over 130 Jesuit and other Catholic universities, high schools, parishes and organizations in the U.S., Canada, Mexico, Spain and El Salvador. The majority of attendees are 16-22 years old.

On Nov. 18, attendees gathered at Columbus Circle in Washington, D.C., to pray, hear from advocates and recommit to work for justice. The “Teach-In” culminated with what is estimated to be the largest Catholic advocacy day of the year. More than 1,500 individuals proceeded to legislative advocacy meetings with members of ­ and their staffs on Capitol Hill to urge Congress to advocate for immigration reform and action on environmental justice issues.

“For more than 20 years, the ‘Ignatian Family Teach-In for Justice’ has brought people together to honor the legacy of the Jesuit martyrs and their companions through learning, prayer and action,” said Christopher Kerr, executive director of the Ignatian Solidarity Network. “As we mark the 30th anniversary of their deaths, we stand together at the margins of today’s world as they did in El Salvador as advocates for a world that better upholds the dignity of all people.”