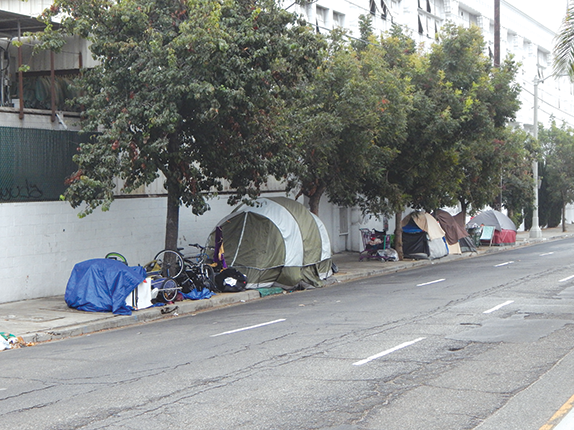 Homelessness in Los Angeles increased by 16% this year. (photo by Cameron Kiszla)

Los Angeles City Attorney Mike Feuer knows firsthand the struggles of helping a person experiencing homelessness. Last year, he helped connect a homeless woman in his Fairfax neighborhood to services and housing, putting her on the path to reestablishing her law career.

“It’s a testament to the power of what it means to be housed, even temporarily,” Feuer said.

But one-on-one help is sometimes not enough, Feuer added, as thousands of people experiencing homelessness are reached and helped each year, yet the number of homeless people in Los Angeles went up double digits according to the homeless count numbers released in June.

Feuer said a variety of services and housing are required to combat the homelessness crisis – for example, a single mom in poverty has different needs than a Vietnam veteran who has a mental illness – but what’s true across the board is the need for urgent action. The amount of housing and services that are available for people experiencing homelessness is not enough to meet the needs of Los Angeles, and the efforts to expand have not been easy, Feuer said, as communities sometimes reject the ideas of putting shelters in their neighborhoods.

“There are still roadblocks in places to put somebody. This is not acceptable to me, and it shouldn’t be acceptable to anyone,” he said.

The best way to combat NIMBYism – short for not in my backyard – is to talk to neighbors, family and friends about the crisis, said Los Angeles City Councilman David Ryu, 4th District. Learning about different programs and homeless housing, then sharing that information with friends and family who are frustrated about homelessness, can help a great deal in moving public perception in favor of ways to address the crisis, Ryu said.

“Share in their frustration, but tell them what they can do, how they can help build transitional or homeless housing in their neighborhood. That’s the easiest thing [Angelenos] could do,” Ryu said.

NIMBYism alone, however, isn’t all that’s holding up those attempting to help alleviate the homelessness crisis, Ryu said. Even with support, it can take far too long to open new beds for those who need them, he said.

In the meantime, Tescia Uribe, chief program officer for the nonprofit organization People Assisting the Homeless, said her group has been working to find creative solutions to create new housing in the state. To date, the group has created more than 1,000 permanent housing units and nearly 1,000 transitional housing beds.

“It can be challenging to build housing, and historically, it’s been very expensive. We’ve been working with the city, the county to do things like purchasing old motels and rehabbing those to become supportive housing,” Uribe said.

She also highlighted Mayor Eric Garcetti’s A Bridge Home program, which is seeking real estate and properties that can be used to create housing for those in need.

“They have found different parking lots and also existing buildings that they have been able to convert or build a tent structure on to create temporary bridge housing for folks while they’re waiting on a permanent home,” Uribe said.

Religious groups are hosting shelters and showers, and other parking lots are being used to allow people to sleep in their cars safely, Ryu said.

Despite all of these efforts, temporary housing and services only treat the symptoms of the homelessness and housing crisis. Until there are enough places for people to live at prices they can afford, the problems will persist, Uribe said.

“It’s great that we’ve helped that many people’s lives, but the question is how are we increasing our housing stock throughout the state, how are we creating more affordable housing opportunities for folks. That’s the heart of the conversation,” Uribe said.

For information or to help, visit epath.org, or reach out to groups like the Los Angeles Mission at losangelesmission.org, or the Midnight Mission at midnightmission.org.

Beverly Hills lights up for BOLD!

Beverly Hills to host USPS for town hall on Monday