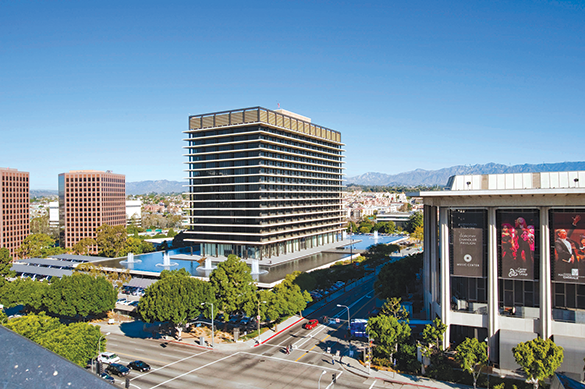 The Los Angeles Department of Water and Power’s John Ferraro Building, which serves as the utility’s downtown headquarters, recently achieved LEED Zero Energy rating, making it the first building in California to receive the certification.

LEED Zero, a program developed by the U.S. Green Building Council, complements the building’s LEED Gold certification received in 2016. Having already received previous certifications as a prerequisite, the building became eligible to receive the new certification because it operated with net zero carbon emissions in 2018.

“We are excited to have achieved LEED Zero Energy at our headquarters,” said Nancy Sutley, chief sustainability officer for LADWP. “This reflects not only how we manage our buildings but also how we operate as a utility. This achievement demonstrates LADWP’s continued commitment to sustainability and industry leadership.”

Constructed in 1965, the John Ferraro Building is a 17-story, all-electric structure that houses one-third of LADWP’s 11,000-plus employees. It is named after the late City Councilman and Council President John Ferraro, who represented the 4th District from 1966 until his death in 2001. As the utility’s headquarters, the building showcases the many sustainable and renewable efforts the department is providing.

The John Ferraro Building achieved LEED Zero Energy by increasing energy efficiency and water conservation through the department’s rebates and implementing a pilot program to install the latest LED technology.

LADWP is also planning to improve the current solar facility at the John Ferraro Building by replacing existing solar modules with newer, efficient models that can provide more than triple the amount of electricity for which the existing panels are rated. New solar canopies will also be installed. The upgrades will generate 1661 megawatt hours annually and will offset 578 tons of carbon dioxide emissions. The electricity generated is enough to power 277 homes.

Additionally, a corner outside the building’s parking lot was expanded to accommodate a battery energy storage system pilot project that will help determine the viability of battery technology for customers and at other LADWP facilities.