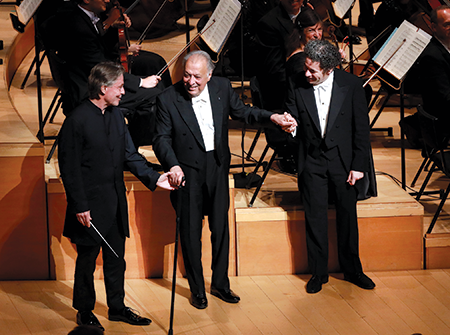 The event marked the culmination of a year-long centennial season, which looked ahead to the orchestra’s next century. The season brought more than 54 commissions and featured initiatives like the award-winning visual artist Refik Anadol’s WDCH Dreams, a dynamic media installation that incorporated imagery, video and audio drawn from the philharmonic’s archive from the last 100 years, projected onto the façade of Walt Disney Concert Hall; Celebrate LA, a free day-long public street festival spread across the City of Los Angeles, stretching from Walt Disney Concert Hall at the Hollywood Bowl featuring six stages for performances; the season-long Fluxus festival; and the production of ATLAS, Yuval Sharon’s final project as the orchestra’s artist-collaborator. The year also demonstrated the organization’s investment in the future with the ground-breaking of the first dedicated YOLA headquarters and the launching of the LA Phil Resident Fellows program.

The concert raised more than $4.6 million for the philharmonic’s music learning programs, which serve more than 150,000 people every year.