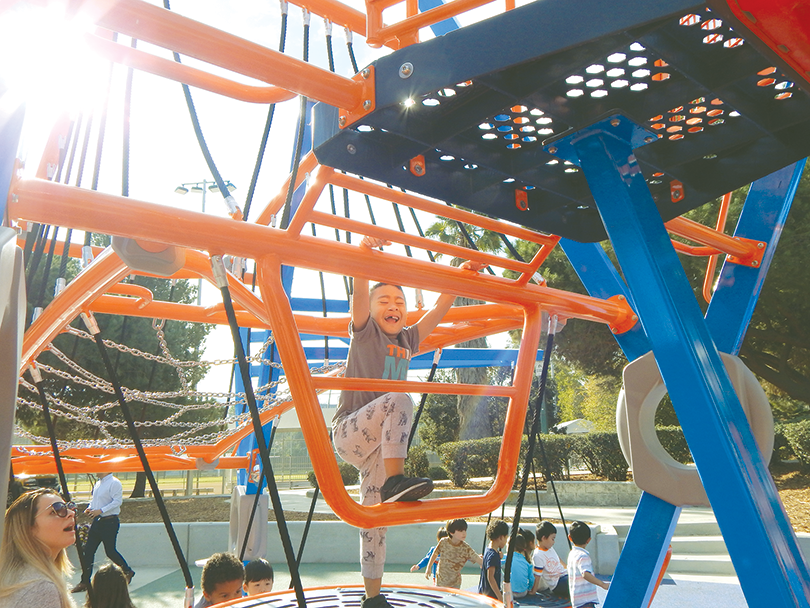 The new playground at Pan Pacific Park was a hit with children who used the new equipment on the day the play structures opened. (photo by Edwin Folven)

The sounds of children laughing and playing could be heard in the southwest section of Pan Pacific Park on Nov. 19 as the city debuted a new playground with updated play structures, shade canopies and ground covering. 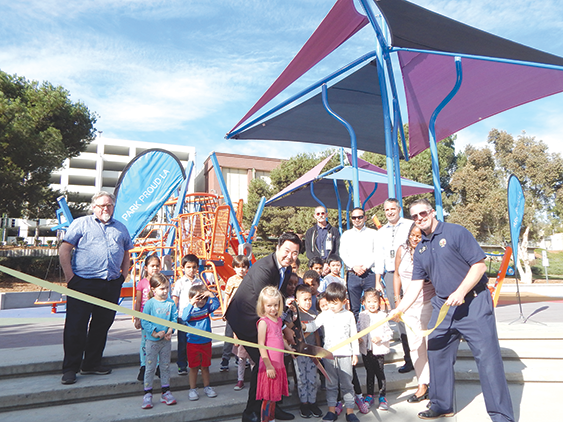 Los Angeles City Councilman David Ryu cut a ribbon for the new playground at Pan Pacific Park with representatives from the city, community members and children from a daycare center at the park. (photo by Edwin Folven)

Los Angeles City Councilman David Ryu, 4th District, joined representatives from the Department of Recreation and Parks and children from a daycare center at the park’s recreation center to cut a ribbon for the new playground. Ryu praised Pan Pacific Park as a regional center for recreation and likened it to Central Park for the surrounding community. The new playground follows the installation of new athletic fields in the southern portion of the park in 2018.

“Strong parks build strong communities, and countless Angelenos rely on Pan Pacific Park for recreation and green space,” Ryu said. “That’s why we have built new athletic fields, rebuilt the baseball diamond, redone the irrigation system and why we are opening this playground. Parks matter, and especially in a community as vibrant and diverse as [this], we should be making sure that every child has a quality place to play.”

The playground project was paid for using $540,000 in Quimby funds, which are funds paid by developers for park improvements when projects are approved. It includes three new slides, a rope climbing feature, swings, merry-go-rounds, benches, bars and shade canopies. The ground surface is made from recycled rubber, making for softer landings. All of the play structures are accessible to children ages 3 to 12.

Eric Calhoun, senior recreation director for Pan Pacific Park, said the new playground is a welcome addition. Calhoun, who grew up in the surrounding neighborhood and recounted stories about riding bicycles in Pan Pacific Park as a youth, welcomed families to use the new amenity.

“The shade structures and modern design is great,” Calhoun said. “We have done a lot of work here in creating new athletic fields, playgrounds and other features. It really is a fully functioning park now as far as amenities.”

Silvia Martinez, a nanny who brought 15-month-old Majohr to the playground on Tuesday, said they have watched the construction over the past months and he has been excited to play there.

“Every day, when we come here, he says he wants to play here. It’s a beautiful park and he loves it,” Martinez said. “It’s beautiful now that it’s open. It’s great for the community and great for the kids to enjoy.”

Ryu spokesman Mark Pampanin added that the councilman is dedicated to continuing improvements at the park. Ideas are currently being considered for more ways to open the southern section of the park and make it more accessible to residents of Park La Brea and the surrounding neighborhood.

“It’s opening it up and making sure this park is a central park for the community,” he added. “There is more to come.”