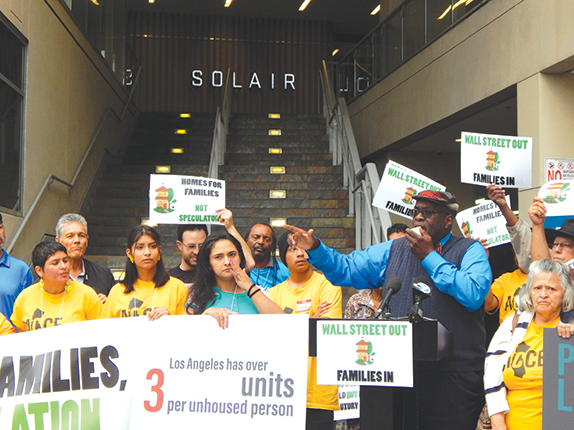 Pastor William Smart, president and CEO of the Southern Christian Leadership Conference of Greater Los Angeles, gave the opening remarks at the protest in front of Solair Condos on Nov. 19. (photo by Morgan Keith)

Update: An author of the report confirmed on Dec. 9 that the report has been pulled and is currently being reworked. The revised report will be released in late January with more comprehensive data.

Protesters gathered outside of the Solair Condos on Wilshire Boulevard on Nov. 19 to advocate for a vacancy tax on empty units amid the city’s housing and homelessness crises.

Approximately 40 protesters attended the event, including members of the Alliance of Californians for Community Empowerment, Strategic Actions for a Just Economy, UCLA School of Law Community Economic Development Clinic and people experiencing homelessness.

The crowd alternated between chants like “Public land for public good!” and “No homes! No peace!”, which were shouted in both English and Spanish.

Organizers said that the Solair Condos were chosen as the protest location because only 45 of its 188 units are the primary residence of a person, leaving 76% of its units effectively vacant, listed as second homes or corporate investments. Fifty-seven units are owned by corporate entities, 6% greater than the percentage of units occupied by residents.

These figures were part of a report summarizing the findings of a survey released by the organizing groups at the event. Solair Condos is located in the city’s 10th City Council District, which is represented by Councilman Herb Wesson. Wesson’s office did not return requests for comment.

SAJE research associate and report author Alex Ferrer addressed the crowd through a megaphone. “In downtown alone, we surveyed nine luxury rental towers and found them to have an average vacancy rate of over 70%,” he said.

“All the kids that you see [at this event] are mine. No matter how hard we try, there’s no way that we’re going to be able to pay rent,” said Gloria Cortez, a mother of three who has been unhoused for the last two years.

The report notes that while normal vacancy occurs when units are waiting for new residents to move in, tens of thousands of units in Los Angeles are being speculatively withheld from the housing system. Speculation occurs when units are intentionally kept vacant by owners seeking to profit by holding onto units, then returning the properties to the market with higher rent.

There are more than 103,000 vacant units in the city and 36,300 unhoused residents – nearly three empty homes for every unhoused person — Ferrer said, pointing to 2017 data from the Census Bureau.

“When developers put up buildings like that, they’re not building for the people that live there. They’re making a bet that wealthier residents will move in in the future,” Ferrer said.

Because 41% of all residential property and 49% of all vacant land in the city is owned by corporate entities, the organizers are proposing a vacancy penalty be instituted in Los Angeles.

The proposed penalty’s revenue would go exclusively toward “community-serving uses that advance housing justice,” according to the report, which outlines the legal procedures that could be used to institute the policy.

Oakland, San Francisco and San Diego are among a number of cities across the country that have either considered or passed anti-vacancy measures.

In Oakland, voters approved the Vacant Property Tax Act, which imposes a flat $3,000-$6,000 annual tax on residential and commercial properties that are occupied fewer than 50 days per year, as stated in Oakland’s Code of Ordinances.

The protesters hope to place a vacant homes penalty on the ballot through a citizens’ initiative or City Council.