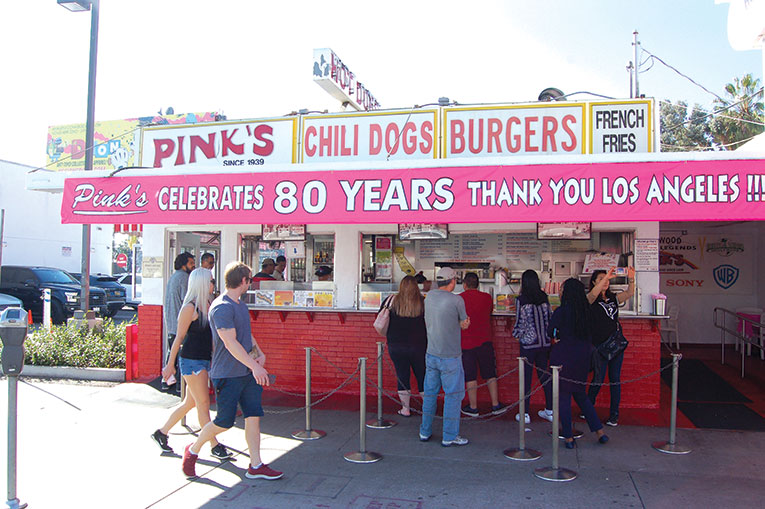 Pink’s Hot Dogs is holding eight days of its “Chili Dogs for Charity” program during its 80th anniversary celebration. (photo by Edwin Folven)

When Paul and Betty Pink started selling hot dogs from a pushcart near the corner of La Brea and Melrose avenues in 1939, it marked the beginning of an enduring legacy that continues eight decades later at Pink’s Hot Dogs.

Beginning on Nov. 8 and continuing for eight days, the Pink family will honor that legacy and celebrate 80 years of success by offering chili dogs for 80 cents for 80 minutes, starting at 8 p.m. The deal is limited to eight per customer. The celebration will include celebrity appearances and visits from local city officials. Mayor Eric Garcetti and LA Phil Music and Artistic Director Gustavo Dudamel kickoff the eight days of fun on Nov. 8, and each day will feature a new, well-known guest.

Richard Pink, who runs the stand with his wife Gloria and sister Beverly, said proceeds from sales of the chili dogs during the 80-minute periods each night will be donated to a charity of the celebrity guest’s choice. He added that the celebration is a way to pay homage to his parents, Paul and Betty, and give back to the community that has made the stand a success. 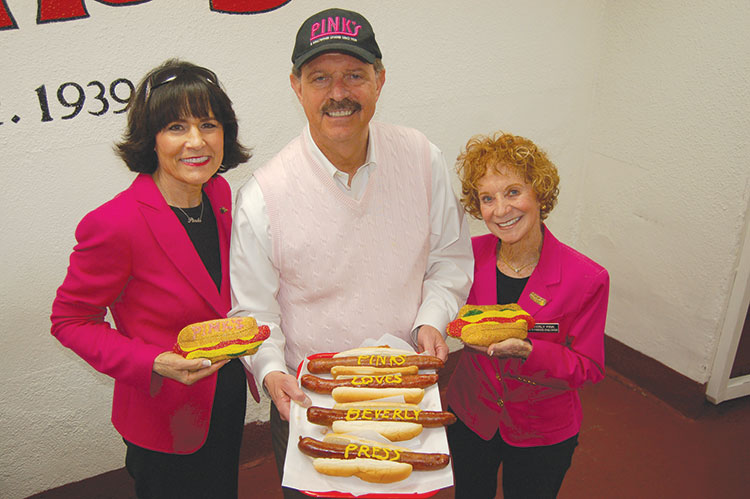 “It’s a combination of a celebration of the 80th anniversary, which in itself is an iconic milestone, and the fun of chili dogs for 80 cents for 80 minutes for eight days starting at 8 p.m.,” Pink said. “Get there early, because we will have hundreds of people lined up. You get to meet a celebrity and know that the money is going to charity.”

Pink said they began celebrating the stand’s history with “Chili Dogs for Charity” events 20 years ago and now host the events once every five years. The milestone celebrations are fitting, he said, given the short lifespans of many businesses in the city.

Paul and Betty Pink put a lot of hard work into growing the business, beginning with a cart and later buying the property where the stand currently exists, he said. The city of Los Angeles previously honored Pink’s Hot Dogs’ longevity, naming the nearby intersection of Melrose and La Brea avenues Pink’s Square last year.

“It’s a fulfillment of a dream my parents had when they bought a little pushcart back in 1939,” Pink said. “In those days, they worked from sunrise until the sun went down because there was no lighting. In 1946, they built the little hot dog stand we have there today.”

Pink said when his parents started, hot dogs sold for 10 cents. The 80-cent chili dogs for the 80th anniversary celebration is a throwback to their earlier days.

“They will still be under $1,” Pink added. “We wanted to give people the feeling of how it was then. It brings people back to a different era, an era when you lined up on the sidewalk and smelled the hot dogs cooking from over the counter. It’s a very nostalgic experience.”

Chili dogs are only part of the 80th celebration at Pink’s, where you may bump elbows with a famous figure in line. Portraits of hundreds of celebrities who have dined at the stand over the years line the walls and many return regularly. Some people who eat there tell Pink they first came with their parents as children. He added that he continually meets people who regale him with stories about their past experiences at the stand.

“People will come up to me and say, ‘I met my wife in line at Pink’s, and every year, we come to celebrate our anniversary’,” Pink said. “Bruce Willis proposed to Demi Moore at Pink’s. There are a lot of stories like that.”

Pink encouraged people to visit during the 80th anniversary celebration and make new memories. Between the celebrity appearances and the throwback prices, the event is sure to be memorable, he said.

“We are not going to do it again until out 85th anniversary,” Pink added. “Come and enjoy something that is going to be a historic event.”