Hope for homeless rising one unit at a time 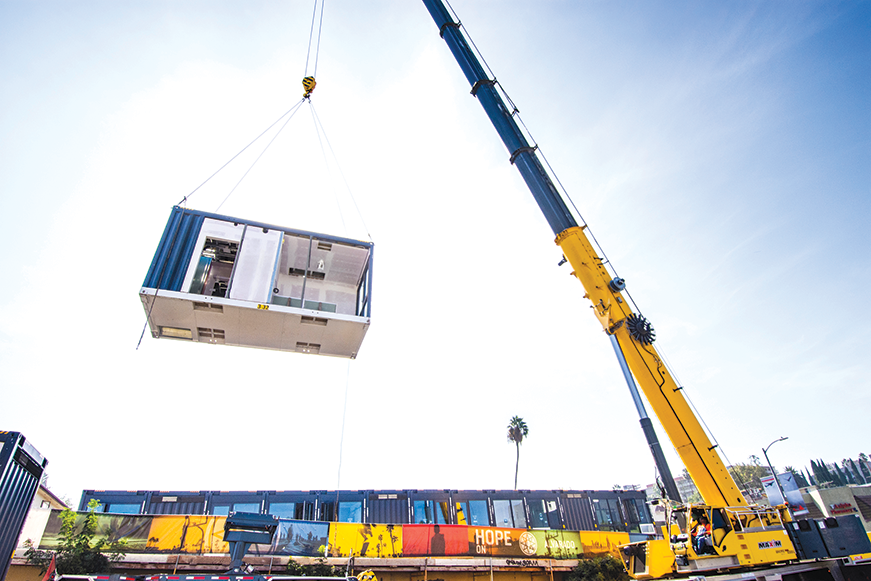 Modules that resemble shipping containers were hoisted into place to create the living quarters in the Hope on Alvarado project. (photo by John Bare)

A new 5-story, 84-unit residential building under construction at 166 S. Alvarado St. will give hope to formerly homeless individuals when it opens in January, and has others hoping it will enable more affordable housing to be built faster.

The project, known as Hope on Alvarado and being built under partnership between Aedis Real Estate Group, KTGY Architecture + Planning and HBG Construction Corp., uses modules similar to shipping containers as living quarters. Manufactured in China by HBG Construction Corp., the containers are made in a factory that also produces shipping containers and are built with the same corner connectors that allow cranes to easily lift and move them into place. The pre-fabrication process allows them to be manufactured at the same time as a building’s foundation and supports are being constructed. The process shortens the construction time for a building the size of Hope on Alvarado to approximately one year. The partnership has plans to replicate the project in other places and hopes they will serve as models for creating critically-needed housing more quickly.

“For a lot of reasons, mostly cost and time, there’s never been a time when it’s made as much sense,” said Mark Oberholzer, associate principal for KTGY Architecture + Planning. “Doing it a little quicker has a lot of benefits for the community. This group is doing more projects faster, and if more people did [that], it would go a long way toward easing the housing crisis.”

Oberholzer said the idea came from Aedis Real Estate Group, which approached the firm with the idea of building with repurposed shipping containers. For reasons including slightly varying size, potential environmental contamination and how rapidly the containers can be reconfigured, used shipping containers are difficult to repurpose for construction, Oberholzer said. They turned to HGB, which manufactures containers known as modules specifically for buildings. The Hope on Alvarado project utilizes 168 modules stacked on top of a ground-level “podium” that will house offices for service providers, Oberholzer said. He credited Aedis Real Estate Group President Scott Baldridge as the catalyst for getting the idea off the ground.

“The partners of the ‘Hope On’ developments have devoted themselves to perfecting this modular solution because we believe it holds great promise for the housing crisis,” Baldridge said. “This is not just a one-off project. It’s a series of places created with a highly replicable design that delivers housing at a speed and scale required by neighborhoods in need.”

The project will serve homeless individuals identified by service providers. The building was designed with living spaces around a central courtyard. In addition to the modules, windows, fixtures and interior components are manufactured off-site and then assembled at the project site. The units are approximately 400-480 square feet.

Oberholzer said Hope on Alvarado is only the beginning of plans for the unique construction process. The group is in the process of creating Hope on Broadway at 52nd Street and Broadway in South Los Angeles, which will offer 49 residential units, and Hope on Hyde Park, at 6501 Crenshaw Blvd., which will have 98 units. 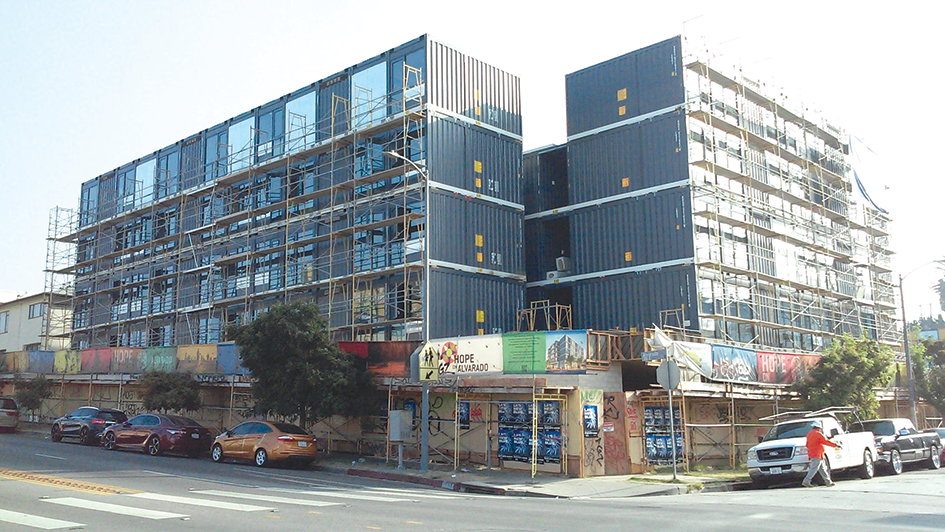 Oberholzer said the building process is becoming more efficient as the project progresses and future buildings may go up even faster. While the planning and approval process differs in every situation and affects the amount of time it takes to build a project, the construction period will continue to get faster, he said.

“You really want to get something built without spending two years,” he said. “We can deliver them in a year.”

Hope On Alvarado is located in the 13th District represented by Los Angeles City Councilman Mitch O’Farrell, who supports the project.

“The brisk pace of construction for this project to bring affordable housing to the 13th District should be the new standard across the city in addressing the crisis of our day,” said O’Farrell, chair of the council’s Homelessness and Poverty Committee. “Lessons can be drawn from this project’s prefabricated construction methods that can help produce more affordable homes faster, reduce costs and utilize those savings for even more construction of similar units.”

Oberholzer said the opening date for Hope on Alvarado is Jan. 20.

Beverly Hills lights up for BOLD!