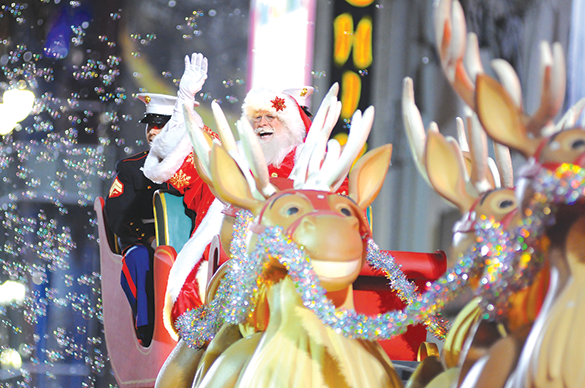 The 88th annual “Hollywood Christmas Parade Supporting Marine Toys For Tots” returns on Sunday, Dec. 1, with a pre-parade concert from 5 to 6 p.m. and the parade from 6 to 8 p.m.

The parade is produced by Associated Television International and presented in association with the city of Los Angeles. The pre-parade concert and festivities will be held at the start of the parade route near Hollywood Boulevard and Orange Street. The public is invited to view the parade along the 3.2-mile route, with performers traveling east on Hollywood Boulevard, south on Vine Street, west on Sunset Boulevard and north on Orange Street.

During the red carpet arrivals and pre-parade festivities, Los Angeles City Councilman Mitch O’Farrell, 13th District, will present a certificate of recognition to Grand Marshal Mario Lopez and his family, and a certificate of recognition to Bret Michaels, who is being honored as Humanitarian of the Year for his charity work with the Bret Michaels Life Rocks Foundation. The foundation sends children with diabetes to camps. Michaels is a lifelong diabetic,

Free curbside seating will be available along the parade route, starting at Hollywood Boulevard and Highland Avenue and continuing along the rest of the route. For those who can’t attend, the parade will be broadcast on The CW Network on Friday, Dec. 13, at 8 p.m., and at different times on the Hallmark Channel throughout the holidays.

Numerous no-stopping zones will be in effect, particularly in the area near Hollywood Boulevard and Orange Street, beginning on Nov. 30. Street closures will also go into effect along the route on the day of the parade from 1 p.m. to midnight. Many streets in the surrounding area will also be closed or restricted on Dec. 1. The Cahuenga Boulevard and Highland Avenue ramps to and from the Hollywood (101) Freeway will close from 3 to 10 p.m. on Dec. 1. Parade-watchers are urged to use public transit.

Petersen goes back to the future with electric vehicles