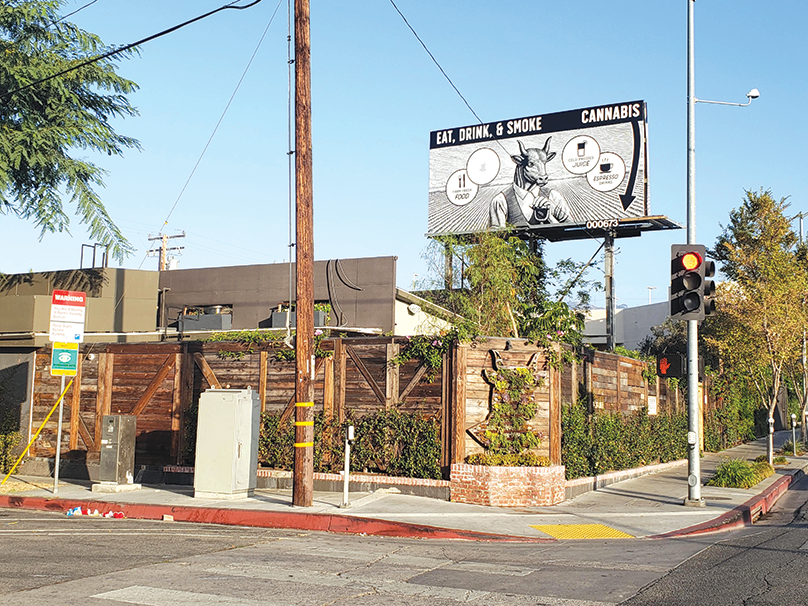 Lowell Café on La Brea Avenue is the only consumption lounge that’s open for business in West Hollywood. (photo by Cameron Kiszla)

“Flexibility” is the key word as West Hollywood seeks to help the city’s fledgling cannabis businesses get off the ground.

So far, only one of the city’s eight winners of a permit for a consumption lounge that allows smoking, vaping and edibles, and none of the eight permit winners for edible-only consumption lounges, has opened. Lowell Café opened in September, with a lounge located adjacent to a separate restaurant that “delivers” food to the dining area, as the lounge can only sell cannabis products, and the restaurant can only sell non-cannabis products.

The council directed city staff to work with the license-holders to see if flexible design standards could make it easier for the businesses to open, especially in cases where there might be some overlap between the cannabis and non-cannabis sides of the business – for instance, if hallways or bathrooms could be shared so the businesses wouldn’t have to duplicate construction work or inspection fees.

The council also agreed to give the consumption lounge permit holders a year-long extension on their requirement to be approved by the Business License Commission. The city gave all permit winners until Feb. 7, 2020, to secure their business license, but due to state regulation, the council granted an extension until Feb. 7, 2021, to obtain a business license so that city staff has time to work with the state to change the regulation. In addition, the extension will apply to all permits won by those who plan to open a consumption lounge, as many of the businesses plan to have their dispensaries and delivery services work in conjunction with the consumption lounges.

The council also agreed to have the Business License Commission find an appropriate level of ownership change, where a permit-winning business owners could undergo slight changes – for instance, the addition of a new investor or the exit of an early investor – and keep the essence of the team that won the initial permit. City staff had proposed 20% as the level of change, but Councilman John Duran suggested 49% would be a better number. Councilman John Heilman bristled at such turnover.

“I do agree that we need to be flexible and that changes will occur, but I want to make sure the people who will be operating these businesses … have the capability of doing this,” Heilman said.

After some discussion, the council decided the Business License Commission was best suited to decide how much ownership change was acceptable. The commission will be asked to return to council with a recommendation at a future meeting.

The council also expressed some support for allowing consumption lounges to let customers take home their leftover cannabis products, or even purchase products and take them home unopened for off-site consumption.

Council members were divided on how much should be allowed to leave the premises, and at what point takeaway sales turn a consumption lounge into a retail space.

Duran suggested the city would be forced to police such sales if limits were put on it, which would drain city or law-enforcement resources.

“Let people order what they want and take home their leftovers. If they want to buy something extra to take home, let them. We can’t police every shop,” Duran said.

Heilman, however, said the other businesses could be negatively impacted by allowing unlimited takeaway sales.

“I want to make sure we put limits on it. Otherwise, we’re going to have 16 retail businesses, not eight, and that’s not what we agreed to, and it’s not fair to those who actually got the retail licenses,” Heilman said.

Though Duran was in support of that proposal, saying the distinction between smoking and edible cannabis products was “not significant,” the other four council members and city staff were against the idea.

“[The edible-only consumption lounges] didn’t get the smoking license, and if you say ‘well, someone can bring in their own cannabis,’ we don’t know where that cannabis is coming from. It’s not been tested. It could be one of the vapes that are the problem. For me, that’s just totally a non-starter,” Councilwoman Lauren Meister said.

In light of the recent outbreak of vaping illnesses, the council also adopted a resolution encouraging the state to improve its verification system for vaping products.

The council next expects to receive an update on its cannabis implementation in March 2020.