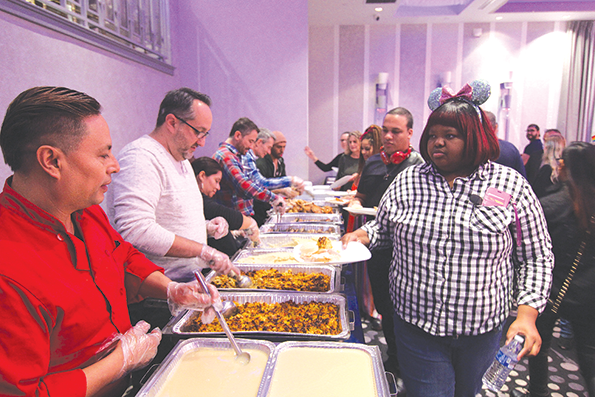 Community Intervention Through Youth, known as C.I.T.Y x1, hosted its 17th annual pre-Thanksgiving dinner for LGBT youth and their allies on Nov. 24 at the Hollywood Banquet Hall.

The pre-Thanksgiving dinner was sponsored by the UCLA Center for Health Equity, city of West Hollywood and St. John’s PRIME Clinic. The event featured a Disney-themed party titled “Magic Queendom.” Many of the youth dressed in Disney shirts and several volunteers dressed as popular Disney characters. A three-hour meet and greet session featured party characters and prizes such as T-shirts, DVDs and hats.

Attendees ages 14 to 24 were treated to a traditional Thanksgiving dinner catered by QQ Cafe and enjoyed pies donated by the Andaz West Hollywood. Beverages were donated by Christ Chapel of the Valley and DJ Keelez played music.

“This is a big honor and I accept it on behalf of all my peers,” Alvarez said.

C.I.T.Y. x1 is also hosting a free Christmas dinner and dance for local homeless LGBT teens on Dec. 15. Titled “The Tamale Wars,” the dinner will be held at Temple Knesseth. 1260 N. Vermont Ave.

For information and to donate, visit cityx1.org.