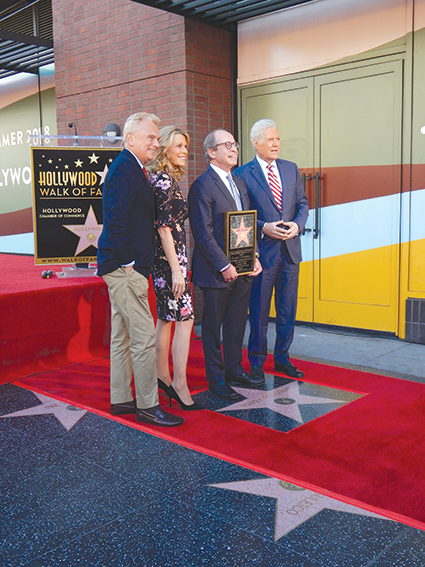 Producer Harry Friedman is best known for his work on “Jeopardy!” and “Wheel of Fortune.” (photo by Cameron Kiszla)

Emmy Award-winning television producer Harry Friedman was honored with a star on the Hollywood Walk of Fame on Nov. 1.

Friedman’s star, dedicated in the category of television, is the 2,680th on the Walk of Fame, and it is located at 6200 Hollywood Blvd.

Friedman started his entertainment career as a writer on “The Hollywood Squares,” and he is best known for his work on game shows. He has served as a producer and later executive producer for “Jeopardy!” and “Wheel of Fortune,” which he joined in 1997 and 1995, respectively. Over the course of his career, he has won 14 Emmy Awards out of 48 nominations and won a Peabody Award. He also set Guinness World Records for most Emmys won by a game show producer, most Emmy nominations for a game show producer, and most game show episodes produced, with more than 12,500.

This is his last season with both shows, as the 72-year-old is retiring. Pat Sajak and Vanna White, hosts of “Wheel of Fortune,” and Alex Trebek, host of “Jeopardy!,” were in attendance to celebrate Friedman joining them on the Hollywood Walk of Fame.

Friedman used his acceptance speech to thank many people who helped him or made an impact in his life, highlighting multiple audience members for the work they’d done and the relationships they’d built. In particular, he highlighted “Wheel of Fortune” and “Jeopardy!” as shows where viewers can find “the magic of TV today.”

“I’m so very pleased and proud to be a part of that experience and extremely grateful to join Pat, Vanna and Alex on the Hollywood Walk of Fame,” Friedman said.