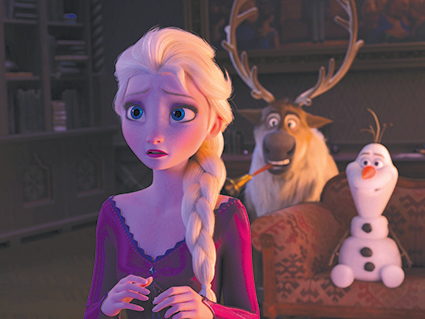 If you’re hankering for a worthy sequel to “Frozen’s” female empowerment ballad “Let It Go,” perhaps the threequel will finally deliver. Not such much in “Frozen II.” Still, while it packs a weak musical punch, the storyline is actually far more compelling, a splendid exploration of Arendelle’s local lore and peppered past.

All is well in the kingdom. Anna (Kristen Bell) and Kristoff (Jonathan Groff) enjoy a blossoming romance. Disney’s stroke of merchandizing genius Olaf (Josh Gad) takes in the fall weather with less fear of melting and even waxes metaphysical about life, including the memory of water (I wonder if that’ll come up later). Even reindeer Sven participates in game nights.

But Queen Elsa (Idina Menzel) is restless. Ever since she “let it go” on that mountainside, her powers continued to grow, while their origins remain unclear. Her ability to create sentient life (namely Olaf and a snow monster) is truly awesome, but she can now add hearing voices to the power set.

Something or someone from the nearby Enchanted Forest calls, and Elsa and her Scooby gang must answer the siren’s call for the fate of Arendelle. One problem: a supernatural mist prevents anyone from entering or leaving the forest. That’s about to change with a little help from the Ice Queen, to invoke Elsa’s name from the Hans Christian Andersen fairy tale.

Hot take: For all its charm, character chemistry and insanely catchy songs, “Frozen” is a run-of-the-mill story. Frankly, when a film sums up everything with love, we’re not traversing any new territory. But this sequel actually sets its sights on new ground, leaving behind familiar terrain early in the story. In place of evil princes, shady merchants, scared townspeople and a whole lotta snow, we encounter Earth Giants, leaves with personality (you heard me correctly), a fire lizard and lots and lots of reindeer.

Along with the new species and locale, add a sea of familiar names in the voice cast: Evan Rachel Wood, Alfred Molina, Jason Ritter and Sterling K. Brown as Mattias, one of many folks residing in the forest for decades. Alas, these new characters are little more than texture accenting the sisters, Olaf, Kristoff and Sven, and in that order of importance. They all sing, even Sven, though a chorus moment explains why the intro song to both films (you know, the one that doesn’t tonally match anything else) belongs there.

The real downer is bland music. With the exception of “Into the Unknown” and “Show Yourself,” featuring Menzel and Wood, the numbers do little more than advance the plot. Granted nothing ever falls to the painful lows of “Fixer Upper,” the most useless song across all things “Frozen.” But little in this sequel feels truly Broadway ready, not in the way so many previous contributions did. That’s rather shocking from Kristen Anderson-Lopez and Robert Lopez, the duo responsible for “The Book of Mormon,” “Avenue Q” and the previous installment.

And rather than learn from the first film’s mistakes, this one doubles down. Remember when Kristoff would talk to his reindeer and respond in a ridiculous voice for Sven? That happens a lot more, coming to a head with a reindeer-infused 1980s pop-metal duet (kinda) that plagiarizes Peter Cetera’s “Glory of Love.”

Like an epic TV series that runs out of steam come the finale, “Frozen II” writes a check it can’t cash. We learn much about Elsa, Arendelle and the mystical forces of the forest, but what transpires during a thrilling third act just doesn’t make sense, even if it thrills.

The story is far more intriguing than its predecessor, but the music and character moments lack heart. Still, “Frozen II” remains an entirely watchable contribution, albeit an imperfect entry.