‘Ford v Ferrari’ is filmmaking in the fast lane 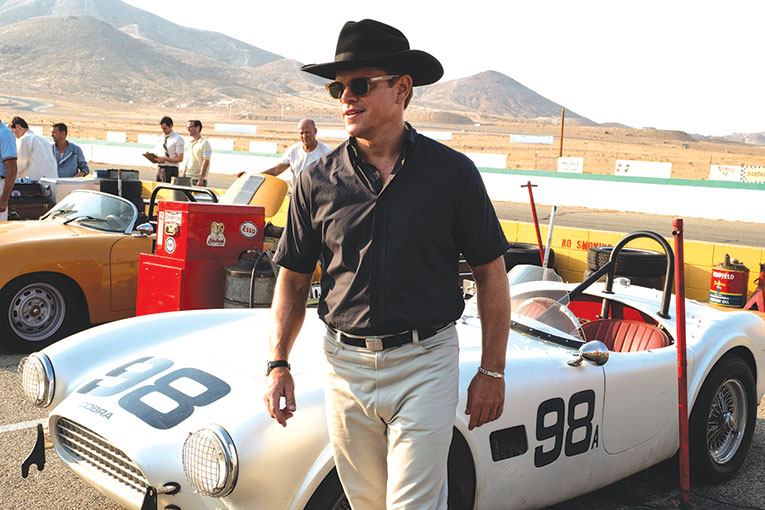 ­Racing belongs on the big screen: car chases, ride pimping, even those muscle car contraptions in “Mad Max: Fury Road.” NASCAR’s popularity might be wavering, but auto history and engineering remains a compelling topic, and “Ford v Ferrari” knows its way around a unique moment in history.

Hell hath no fury like a privileged rich dude scorned. Meet Henry Ford II (Tracy Letts), who responds to dipping sales in the 1960s by threatening to fire all his employees, including the manufacturing line, if they don’t come up with ways to increase sales. Luckily, Lee Iacocca (Jon Bernthal) has a plan: make Ford a sexier brand by acquiring the recently bankrupt Ferrari. Alas, this plan falls through, but not before Enzo Ferrari (Remo Girone) takes several personal digs at both Ford the company and the man.

Ford the sequel won’t have any of that. Ferrari, the man, loves his racing cars, so our fragile American rich dude wants revenge. And so, he throws a whole lotta money into creating a race car to win gold at Le Mans, the 24-hour racing event still held in France today. Dear Ferrari might not have kept a viable car company afloat, but he always dominates this event. But what do some cowboys know about European racing?

Of course, some hiccups slow down their progress, thanks to Leo Beebe (Josh Lucas in yet another role as a slimy rich dude). Ford’s primary concern surrounds Miles, whose know-it-all confrontations earn him few supporters. His fans, however, include his wife Mollie (Caitriona Balfe), son Peter (Noah Jupe) and Shelby, who often notes Miles’ war record driving tanks for the British Army during World War II.

While the film’s title implies a story of two automobile titans going head to head, everything unfolds from Ford’s side. For that matter, Ford Jr. and his marketing minions hardly grace the screen and rarely do so in a favorable light. The narrative core revolves around the bromance between Miles and Shelby (and yes, he’s the other rich dude behind the Shelby Mustang).

As expected, putting Damon and Bale on screen together is dynamite.

While the last 45 minutes focuses on the intense final showdown at Le Mans, “FvF” excels at exploration. All the test runs, brake replacements and extinguished fires reveal the many variables involved in keeping drivers safe and driving fast.

While these elements play out nicely, condensed by the language of film, a more intriguing story lurks beneath. When “The Social Network” premiered, Aaron Sorkin’s screenplay offered a hint of this: less fear about embracing jargon, going deeper into what might be considered too deep, possibly ostracizing broad audiences.

“FvF” largely ignores the engineering feats that make this story truly enthralling. Too often, notable moments of technological advancement devolve into simplistic formulas, algorithms and fixes. Perhaps future films will bravely expect more from audiences, starting with writing willing to do something different. But this is merely wishful thinking that shouldn’t discount all that works well in one of 2019’s most charming films.

Director James Mangold (“3:10 to Yuma,” “Walk the Line”) continues his hot streak following 2017 Oscar nom “Logan.” Sure, rumors of an “X-23” or “Star Wars” film went away, but “FvF” is far from a moderate compensation. He knows his way around period films, constructing authentic visual and audible experiences.

“Ford v Ferrari” might play fast and loose with some historical facts (what film doesn’t), but the outcome is still incredibly entertaining, a surefire frontrunner come awards season. Thrilling race sequences, fantastic performances and a marvelous piece of history will even hook moviegoers with little to no interest in car culture.