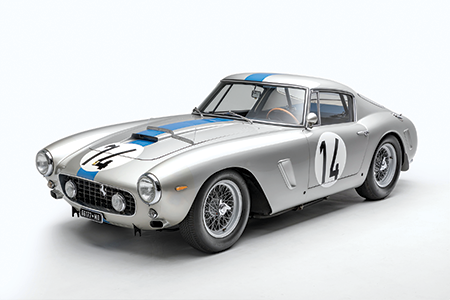 In anticipation of the new film, “Ford v Ferrari,” the Petersen Automotive Museum is displaying five vehicles throughout the museum — including a 1961 Ferrari 250 GT SWB SEFAC, a 1957 Ferrari 625/250 Testa Rossa and the first production Shelby Cobra from the “Winning Numbers” exhibit — that are pivotal to the true story behind the movie.

“Ford v Ferrari” tells the story of Ford’s victory over Enzo Ferrari’s race cars at 24 Hours of Le Mans in France in 1966. The five vehicles currently on display at the Petersen that help tell this story include the 1952 Ferrari 212/225 Barchetta, which was ordered by the Ford Motor Company in the name of Henry Ford II and is believed to have inspired a number of 1955 Thunderbird design features; the 1967 Ford GT40 Mark III, which is the road car version of the race car in the movie; the 1962 Shelby Cobra, which is the first production Shelby Cobra; as well as the 1961 Ferrari 250 GT SWB SEFAC and 1957 Ferrari 625/250 Testa Rossa, which both appeared in the film.

The Ferrari 250 GT SWB, Ferrari 625/250 Testa Rossa and Shelby Cobra are currently on display in the “Winning Numbers” exhibit, a selection of the first, fastest and most famous road and race cars from the private collection of Petersen’s founding chairman, Bruce Meyer. The 1952 Ferrari 212/225 Barchetta is on display in The Vault presented and the 1967 Ford GT40 Mark III is on display on the museum’s third floor.

“The story of Ford’s triumph over Ferrari at the 1966 24 Hours of Le Mans will be told for generations,” said Petersen Executive Director Terry L. Karges. “We’re excited to see the film, but we’re most excited to offer fans of the movie an opportunity to see the cars that will be in the film and learn about other vehicles that are pivotal to the ‘Ford v Ferrari’ back story.”

Fans can also watch one of the first in-depth documentary spotlights about driver Ken Miles and the 1966 Le Mans race for free on the Petersen’s YouTube channel. Titled “8 Meters,” the film, which was produced by Kahn Media in 2016, offers historical context about race car driver Ken Miles and Ford’s historic 1-2-3 victory at the 1966 24 Hours of Le Mans.

“Winning Numbers” will be on view at the Petersen through Jan. 19.

The Petersen Automotive Exhibit is located at 6060 Wilshire Blvd. For information, call (323)930-2277, or visit petersen.org/never-lift.