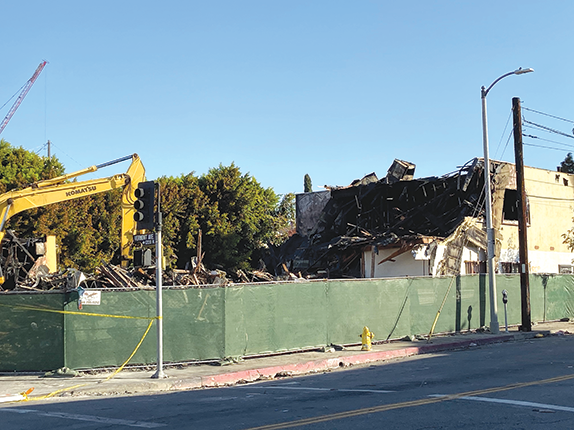 A fire in a vacant building in Hollywood was extinguished in just under two hours. No injuries were reported. (photo by Edwin Folven)

More than 115 firefighters sprang into action on Nov. 22 to battle a blaze at a vacant medical clinic building in east Hollywood.

The Los Angeles Fire Department received a report about the fire at 7:36 p.m. and personnel arrived at Vermont and Lexington avenues to find flames and heavy smoke emanating from the 5,500-square-foot building. Firefighters attempted to enter into the structure, which had a single-story in front and two stories toward the rear. They encountered intense flames and were forced to retreat, LAFD spokeswoman Margaret Stewart said. Because the roof was unstable and the building was vacant, firefighters changed the approach to a defensive operation to prevent the fire from spreading.

Stewart said firefighters used water streams from the building’s exterior to douse the flames, which were extinguished in just under two hours. No injuries were reported. The cause of the fire remains under investigation, and there was no estimate of damage. Construction crews were on-site on Nov. 25 to demolish the heavily-burned structure.