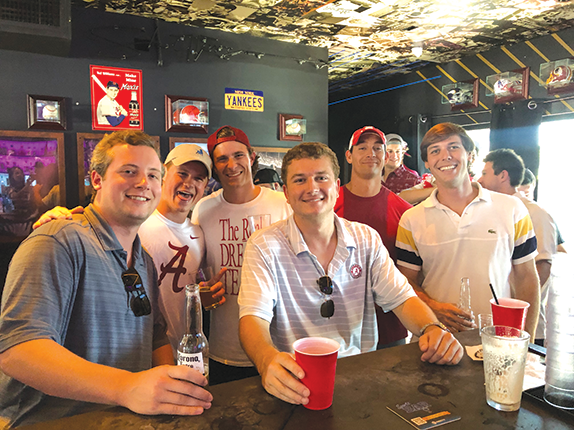 Alabama fans will gather a watch the game against undefeated rival LSU at the Naughty Pig in West Hollywood this weekend. (photo courtesy of Justin Klinger)

On Saturday, Nov. 9, two of the best teams in college football will face off in Tuscaloosa, Alabama. The upcoming visit of the second-ranked LSU Tigers to the home of the third-ranked Crimson Tide has drawn nationwide attention, including that of President Donald Trump, who is expected to be in attendance.

Locally, the matchup has also captured the attention of Justin Klinger, co-owner of the Naughty Pig sports bar in West Hollywood. Most Saturdays this fall, the Naughty Pig has hosted the Crimson Tide faithful for watch parties after Klinger was introduced in the offseason to two groups of Alabama fans who were looking for a place to watch the games.  He brought key figures in both groups together, and now his bar at 8264 Sunset Blvd. is frequently full of crimson-clad patrons.

“We didn’t know what we were getting into and day one, they brought 125 people. They’re always really respectful and nice,” Klinger said.

The Naughty Pig provides a taste of home, with drinks like the citrus juice-based Yellow Hammer and Long-Island-Tea-like Sabanade, the signature cocktails of two of Tuscaloosa’s most popular bars, and the Bryant-Denny Dog, a hot dog sold in the Crimson Tide’s stadium. The Naughty Pig also offers discounts for the large group of fans, who will play the school’s fight song on the bar’s speakers after touchdowns and participate in chants and sing-alongs like they’re at the game.

“We don’t mind letting them run around and do some cheering. It’s all in good fun,” Klinger said. 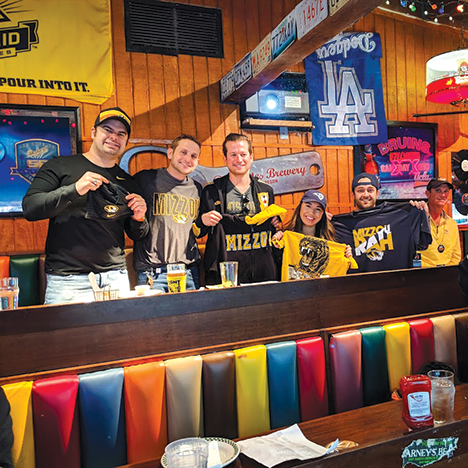 Fans of fellow SEC school Missouri gather at Barney’s Beanery in Westwood to catch their team play. This Saturday, they’ll face off against the sixth-ranked Georgia Bulldogs in what’s likely to be a tough game for the 5-3 Tigers.

Marcus Johnson, the social chair for the Los Angeles and Orange County Chapter of the Missouri Alumni Association, said Tiger fandom is about more than just wins and losses.

“It’s a place of familiarity in such a foreign place. [If you’re] someone from the Midwest coming out here, you meet other people from the Midwest, and if you’re brand new to the area, it’ll ground you, because L.A. can be an overwhelming place,” Johnson said.

Barney’s Beanery offers a discount for Missouri fans and plays the game’s audio over the speakers, Johnson said, and the Tiger faithful will set up a table full of Mizzou swag and set up an inflatable Truman, the school’s tiger mascot, at the top of the bar’s stairs.

Johnson said in the seven or eight years Missouri fans have gathered at Barney’s, Missourians, alumni and friends from all over Los Angeles have gathered, and the get-togethers are so well-known that even visitors to Los Angeles know it’s the best place to watch the Tigers play. On at least one occasion, a passenger with a layover at LAX left the airport to catch the first half of a game at Barney’s before heading back for their flight, Johnson said.

While the Naughty Pig and Barney’s Beanery focus on one team, a few fanbases call the Parlor on Melrose Avenue home, said Patrick Morgan, the bar’s general manager.

From Clemson – college football’s reigning champion – to powerhouses like Michigan and Penn State and less-successful schools like Kansas, the Parlor accommodates multiple fanbases at once.

The bar is more than 10,000 square feet and contains discrete areas that allow each fanbase to receive special attention without distracting the other schools’ supporters too much, Morgan said.

Each area is likely to be decorated with a flag to indicate which game will be shown, and fanbases might be treated to team-colored shots when their squad scores, Morgan said. Other times, a touchdown might be celebrated with the team’s fight song, and for Penn State, they’re likely to hear “Sweet Caroline” played at the end of the third quarter, a tradition in Beaver Stadium.

“That’s my job or another manager’s job on these days, to make sure everyone feels special … We’re trying to create an atmosphere that’s reflective of when they were back in school,” he said.

In college football, passions can run high, and putting so many fanbases together – especially Michigan and Penn State, who are in the same division and play each year – creates an environment of friendly competition, Morgan said.

“Sometimes they’ll [get chippy] or whatever … [But] a lot of these groups know each other and they’re usually not playing against each other. I think there’s a healthy camaraderie. The Parlor, it’s kind of their meeting place. There’s that sense of community, and they are kind of friends,” Morgan said.

Business leaders bulk up board of directors at Wallis Annenberg