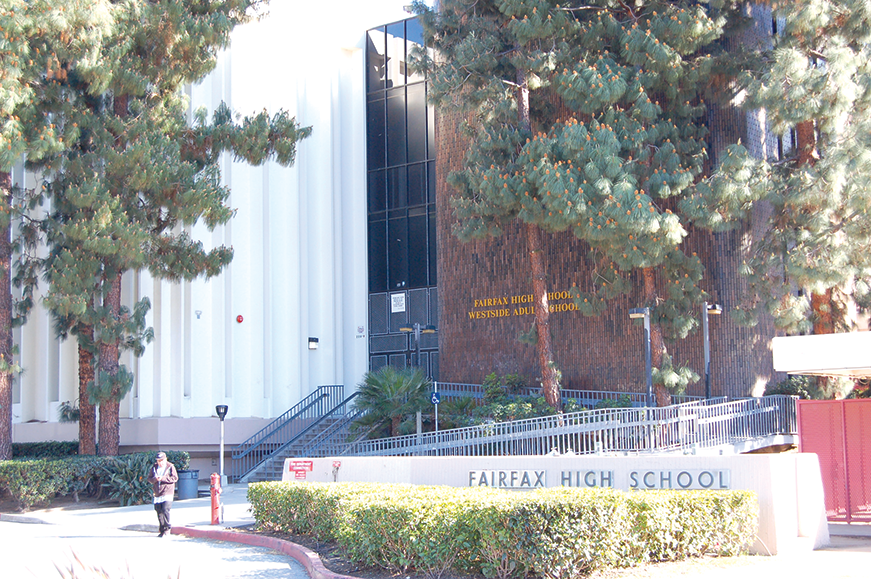 With Laurel Span School no longer an option for the West Hollywood-Fairfax Academy, Fairfax High School is likely to be the recommended site. (photo by Edwin Folven)

The fears of the Laurel Span School community that a new proposed middle school would be on their campus have been alleviated. Fairfax High School, however, is still being considered as a site.

On Nov. 14, a letter from Los Angeles Unified School District Board Member Nick Melvoin, 4th District, and Cheryl Hildreth, superintendent of LAUSD’s Local District West, which includes the West Hollywood and Fairfax areas, confirmed that “the proposed new program will not be located on the Laurel campus.”

Laurel will now be allowed to focus fully on the cinematic arts magnet program it will begin in the fall.

“We just want to be left alone so we can do this project we’ve been working on for so long,” Laurel Span teacher George Reyes said.

If Fairfax High School is selected as the site of the new middle school, which has a working name of the West Hollywood-Fairfax Academy, two programs currently on the campus – the Career and Transition Center West and Fairfax Police Academy Magnet – will likely be relocated, CTC teachers Royce Viso and Barbara Jefferson said. The police magnet would likely move to a less desirable space on campus, while CTC would be moved elsewhere within the district, said Aris Biegler, United Teachers Los Angeles chapter chair for Fairfax High. An LAUSD spokesperson did not answer questions about the WHFA before press time.

The new middle school is expected to be considered by the LAUSD board on Dec. 3. The board will debate the recommendation of Local District West, which Viso and Jefferson said appears to be in support of the Fairfax High site as opposed to another option school district officials have publicly discussed, West Hollywood Community Day School.

Jefferson said she learned about the potential relocation through flyers she discovered by chance. Jefferson said when she brought the information on the flyers to her principal’s attention earlier this month, a meeting with LAUSD officials was quickly announced.

At that meeting on Nov. 14, some members of CTC’s faculty and staff were told about the move, and parents were informed at a meeting the next day, Jefferson said.

Jefferson said school district officials apologized to the CTC’s staff for the communication issues. Melvoin and Hildreth acknowledged similar issues with “this process of engagement” in their letter to the Laurel community.

“[District officials] said they made a misstep and going forward, they would do better,” Jefferson said.

Jefferson said the CTC’s 84 students were informed in a school-wide meeting on the afternoon of Nov. 15, and the reaction was mixed. Some students were in favor of relocating, she said, but others were staunchly opposed.

Viso said the CTC, which teaches job and independent living skills to 18- to 22-year-olds with autism, intellectual disabilities and other special needs, was promised a new home “as good or better” than their current site at Fairfax by school district officials.

The current site is not ideal, Viso said, but in the three years the program has been at Fairfax High, the CTC has developed relationships with nearby businesses, providing job training opportunities for students, such as feeding pets at local pet stores and working at Walgreens and the nearby Greenway Court Theatre. Those relationships help provide students with work experience in the community, Viso said, which is one of the CTC’s goals.

“‘As good or better’ includes the neighborhood, because we need to end up in a community that is rich with job opportunities for our students. If we end up in a neighborhood with no nearby businesses, it’s not going to work,” Viso said.

Viso and Jefferson criticized the timing of the board’s vote, since so many stakeholders have only learned of the potential changes a few weeks before the Dec. 3 meeting.

“Not only is it around the corner, but it’s directly following Thanksgiving break, when nobody’s around to talk about this stuff,” Viso said.

On Friday, Nov. 22, teachers associated with UTLA, parents and students will protest the proposed relocation from 7:15 to 7:45 a.m., Biegler said.

The protesters will wear red and make their displeasure known for the arrival of Melvoin, who is expected to attend the Coffee with the Principal event scheduled for 8 a.m. that morning.

Biegler said he’s heard from parents and students who are concerned about the futures of the two programs at Fairfax High.

“I get it if you don’t tell the teachers; we’re employees,” Biegler said. “But the parents should have known.”

I really hope that this matter of co-locating this school at Laurel will finally be put to rest, at least for a while until our Magnet is up and running and families will see it for the very attractive option that it is. Experience has shown me, however, that this issue keeps resurfacing every so often, like a recurring nightmare.

For example, we were assured that our school would be left alone last May, right before our Magnet proposal was approved by the school board. At that point, apologies for issues with communication were made. Then we were blindsided with this issue again in late October. Our school community made their displeasure very clear, despite an attempt to divide us by illogical claims that our principal was secretly plotting against our magnet while championing the project. Obviously, false. Thankfully, our community rejected these efforts and became more united as a result.

When I read about this latest development at Fairfax HS, I felt a sense of Déjà vu. It’s very similar to our recent experiences. The following section really stood out:

Melvoin and Hildreth acknowledged similar issues with “this process of engagement” in their letter to the Laurel community.
“[District officials] said they made a misstep and going forward, they would do better,” Jefferson said.

Now, I would like to believe that interested parties are not intentionally trying to keep school communities in the dark so that plans can move forward until they cannot be reversed. No, I’d rather believe that there is a pattern of behavior that is occurring that is impeding their ability to learn from their previous communication challenges.

I am a special education teacher and I study patterns of behavior to help my students rectify certain challenging behaviors so that they may better communicate and succeed.
I, therefore, would like to propose a “behavior intervention plan” to help Mr. Melvoin and his team navigate these communication challenges.

1. The behavior impeding learning is: Failure to communicate with parents and community stakeholders regarding plans to create this new academy
2. It impedes learning because it disrupts families and students.
3. The need for a Behavior Intervention Plan: Serious
4. Frequency or intensity or duration of behavior: monthly
5. Reported and observed by the community in and around Fairfax HS.
6. The predictors for the behavior are a lack of compliance by local families and community stakeholders.
7. What supports the individual(s) using the problem behavior? A few individuals pushing for this new academy despite community concern and dismay.
8. Intervention: CONTINUED AND VOCAL ASSERTION OF COMMUNITY OPPOSITION AND VISIBILITY.

I believe that if community members employ the above-detailed plan, we can help Mr. Melvoin and his team with their “process of engagement” and “misstep(s) and therefore assist them “going forward, (to) do better,”and show greater transparency. After all, isn’t that what we all want?