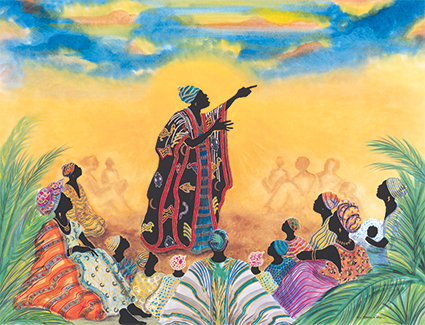 “The Storyteller,” by artist Kathleen Atkins Wilson, is included in the new exhibit. It was published in 1991 in “The Origins of Life on Earth: An African Creation Myth.” (photo courtesy of the Los Angeles Public Library)

“The Los Angeles Public Library is honored to be the first West Coast venue to host this beautiful exhibit,” Principal Librarian Jené D. Brown said. “These award-winning illustrations of phenomenal African American children’s literature are inspiring and preserve the legacy of Coretta Scott King, who was also a leader in the Civil Rights Movement. Half a century later, the demand for diverse books for children remains.”

The awards have become one of the most distinguished honors in children’s literature. They are presented annually by the American Library Association to African American authors and illustrators of books for children and young adults that demonstrate an appreciation of culture and universal human values.

King, who passed away in 2006, was an author, activist and singer who often incorporated music into her civil rights work. The award pays homage to her courage and determination in working for peace and world brotherhood, while commemorating the life and civil rights work of her husband, Dr. Martin Luther King, Jr.

The traveling art exhibition was curated by the National Center for Children’s Illustrated Literature in Texas. It is open during regular library hours: 10 a.m. to 8 p.m., Monday through Thursday; 9:30 a.m. to 5:30 p.m., Friday and Saturday; and 1 to 5 p.m., Sunday. For information, visit lapl.org.

Enjoy a ‘FROZEN’ night on ice in DTLA