Exhibit explores impacts of the atomic bombings in Japan 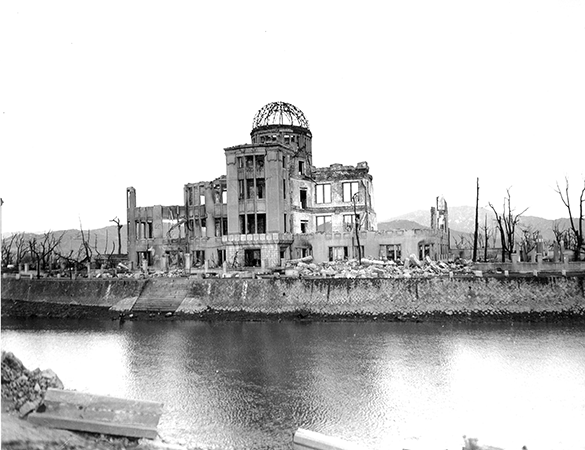 The Hiroshima Prefectural Industrial Promotion Hall, known as the Atomic Bomb Dome, is shown in a photograph circa October or November 1945. (photo by the U.S. Army/courtesy of Hiroshima Peace Memorial Museum)

The Japanese American National Museum is hosting a traveling exhibit titled “Under A Mushroom Cloud: Hiroshima, Nagasaki, and the Atomic Bomb” running from Saturday, Nov. 9, through June 7, 2020.

The exhibition, which marks the upcoming 75th anniversary next year of the atomic bombs being dropped in Japan in 1945, was conceived and prepared by the cities of Hiroshima and Nagasaki. Over 200,000 people died immediately or by the end of the year and both cities were structurally ruined. The aftereffects of the radiation on the survivors continues to this day. Both cities rebuilt rather than abandon their historic sites.

“Under A Mushroom Cloud” displays damaged possessions left by the victims. Hiroshima and Nagasaki collected and preserved the artifacts, including clothing and other personal items. The exhibition is composed of photos and text panels that detail the histories of the cities, the development of the two bombs, their detonations and the immediate aftermath for the survivors, known in Japan as “hibakusha,” of both cities. In addition to the artifacts, the exhibition will feature origami cranes folded by Sadako Sasaki, one of the most well-known survivors of the bombings, and former President Barack Obama.

The Japanese American National Museum will supplement the exhibition with panels focusing on the number of Japanese Americans who were caught in the bombings, especially in Hiroshima. Before World War II, it was common for immigrant Issei parents to send their American-born Nisei children to Japan for education. By some estimates, approximately 15,000 Japanese Americans were living in Japan in 1945.

Because large number of Japanese immigrants came from Hiroshima, many children were sent there to live with relatives and endured the explosion. Those who survived and were able to return to the United States faced ongoing health issues unfamiliar to the American medical community.

“The Japanese American National Museum is honored to be the venue of this historically significant exhibition,” said Ann Burroughs, president and CEO of JANM. “’Under A Mushroom Cloud’ shares a chapter of history that all of humanity should know and understand. It is to the credit of the cities of Hiroshima and Nagasaki that they created this exhibition with the hope that by sharing these stories, no one would want to employ nuclear weapons ever again. JANM decided to add to this exhibition, highlighting the Japanese American historic connection to these events while displaying artwork that touches upon the emotional magnitude of this story.”

On Saturday, Nov. 9, from 2 to 4 p.m., the museum will host “Passing the Legacy: Hiroshima and Nagasaki,” a special presentations with the exhibition’s curators, the president of Hiroshima Peace Memorial Museum and atomic bomb survivors.