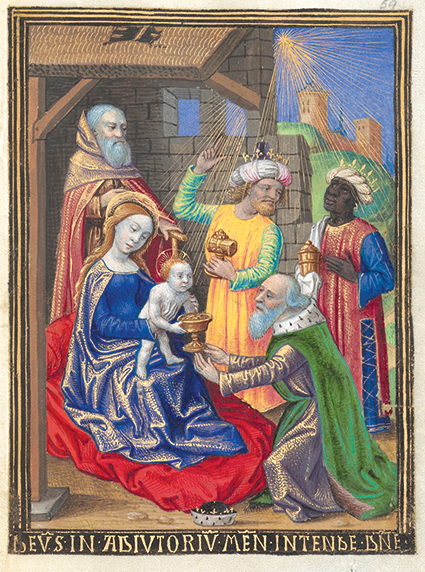 “The Adoration of the Magi” by Georges Trubert is included in the new exhibit at The Getty. (photo courtesy of the Getty Center Museum)

Early medieval legends stipulate that one of the three kings who paid homage to the Christ child in Bethlehem was from Africa. Written accounts sometimes describe Balthazar, the youngest, as having a dark complexion. Nevertheless, it would take nearly 1,000 years for European artists to begin representing him as a black man. “Balthazar: A Black African King in Medieval and Renaissance Art” examines how representations in European art of Balthazar as a black African coincided with the increased interaction between Europe and Africa, particularly with the systematic enslavement of African peoples in the 15th century.

“This exhibition examines the illuminated manuscripts and paintings in the Getty’s collection that tell the story of Balthazar, placing this artistic-religious narrative in the context of the long history of material trade networks between Africa and Europe,” said Timothy Potts, director of the Getty Museum. “By exploring how his representation coincided with and was furthered by the rise of the slave trade, we can begin to understand the works of art in our collection, and the broader historical and cultural phenomena they reflect, in new ways.”

Revered as wise men, the “magi from the East,” as described in the Bible, came to be known as three kings because of the number and richness of their gifts. European writers later assigned names to the individuals – Caspar, Melchior and Balthazar – and specified that the kings came from Europe, Asia and Africa.

Despite further written descriptions of Balthazar as a black African, European artists continued for centuries to represent him as white. In the 1440s, with the Portuguese incursions into West Africa, the slave trade escalated in unprecedented ways and ultimately brought millions of subjugated black Africans into Europe and the Americas. It was at that historical moment that artists began representing Balthazar as a black African with some frequency. European artists also often alluded to his African identity by depicting him as white but with a black attendant. This frequent juxtaposition of white ruler and black servant in 15th-century images of the magi reflects the commodification of black Africans in Europe at the time.

The museum is located at 1200 Getty Center Drive. For information, visit getty.edu.