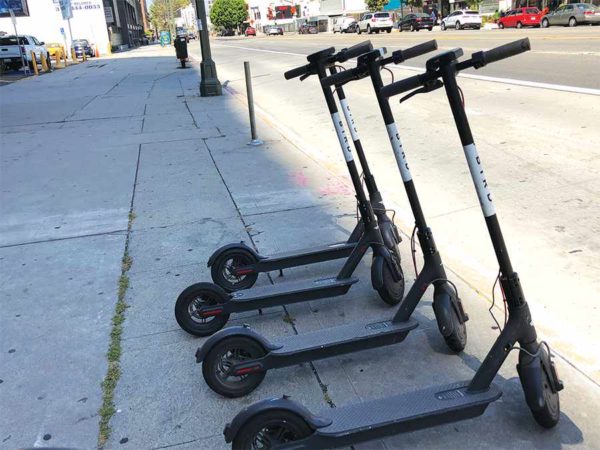 With a ban on shared mobility devices in Beverly Hills set to expire in January, the City Council unanimously approved to extend it for another year on at its meeting on Nov. 19.

The council discussed their options at a prior meeting on Nov. 5, to continue the shared mobility devices ban, modify the municipal code to only allow the devices along the North Santa Monica Boulevard bike lanes or begin a pilot program.

A pilot program could be launched by either releasing a request for proposals or negotiating a short-term operating agreement with a specific vendor or vendors. Companies that have given presentations to city staff include Spin, Bird and Lime, all of which produce electric scooters.

All of the council members agreed that the city of Beverly Hills is not ready to lift the ban on e-scooters or other shared mobility devices, and cited a variety of reasons.

City Councilman Robert Wunderlich said he envisions accommodating the devices a few years down the road once more infrastructure is developed.

“I would be more receptive to receiving proposals and trying to craft a proposal with mobility devices in parts of the city that are less congested, have less traffic and might be safer for them to use,” Wunderlich said. “I don’t think we’re ready for a citywide implementation.”

Tim Alborg, Spin’s director of government partnerships, spoke during public comment about helping finance infrastructure in the city for shared mobility devices and other modes of transportation.

“To support Beverly Hills’ safety and transportation investments, Spin will share 10 cents with the city of Beverly Hills for every scooter trip taken,” Alborg stated in his presentation.

Friedman’s son recently participated in a rotation in an emergency room and told him about people coming in due to scooter accidents.

“There were two to three people that came in with injuries per night from these vehicles. Many of these were head injuries, and that’s a big concern,” Friedman said.

Maurice Henderson, Bird’s director of government partnerships, responded to safety concerns by citing data from its Santa Monica pilot program, where .015 accidents occur for every 1,000 trips. He also added that studies in Portland, Baltimore and Austin found no appreciable difference between the safety records of bicycles and scooters, and in some cases found scooters to be safer.

Both Bosse and Gold doubled down on safety concerns and recalled incidents where people had been injured. Additionally, they noted that the general public’s reception of the e-scooters was overwhelmingly negative.

“I didn’t hear really anybody, maybe three people out of 200 people that responded, said they felt comfortable with us lifting the ban and bringing it back,” Bosse said after conducting a poll on her social media accounts.

Mirisch concurred, adding that he believed the devices to be “more of a fad than the future.” He drew the meeting to a close, with council members agreeing.

Mirisch stated that he would be open to a pilot program if his requirements were met: data and revenue sharing, liability for accidents being assigned to vendors, and the institution of a helmet law, geofencing and unsafe parking penalties.

The ordinance’s extension will go into effect in January.