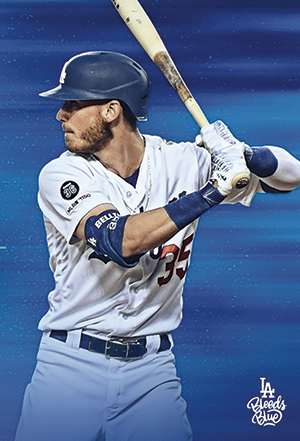 “I had a ton of fun watching him this year. It’s very well deserved. What everyone says is true – great talent, great athlete, all that stuff…but man, he’s just a great baseball player and there is nothing else to say. Congratulations Cody!” Kershaw said.

Bellinger is the third Dodger player to win the Rookie of the Year and MVP, joining Jackie Robinson and Don Newcombe. He is now the only player in franchise history to win the MVP, Rawlings Gold Glove and Louisville Silver Slugger in the same season.

Bellinger, in his third season with the Dodgers, appeared in a team-high 156 games, batting .305 with 34 doubles, 47 homers and 115 RBI. He concluded his regular season campaign recording career-highs in runs, hits, doubles, home runs, RBI, walks and stolen bases.

In the field, Bellinger appeared in 115 games in right field, 25 in center field and 36 at first base, recording a combined .991 fielding percentage.

“I want to congratulate Cody on a tremendous season. Playing every game with passion and a focus on winning a baseball game was the impetus for this MVP campaign. There wasn’t one part of his game that he didn’t dominate. Finally, I’d like to thank him for putting the Dodgers and his teammates above all else,” Dodger Manager Dave Roberts said.