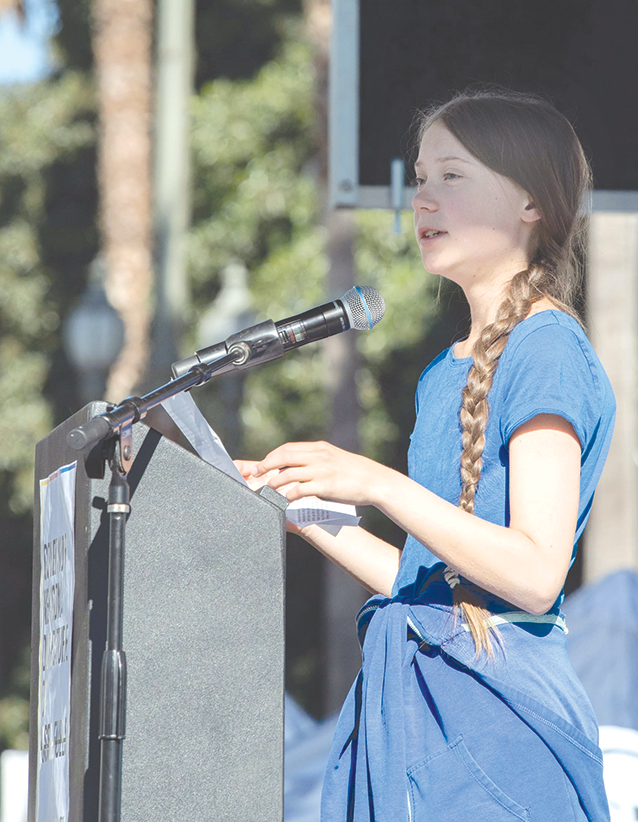 Approximately 3,000 young adults participated in the Youth Climate Strike LA and called for stricter state regulations on oil drilling and production in urban areas, as well as other reforms to protect the environment. Thunberg, 16, addressed the crowd outside Los Angeles City Hall and met with fellow activists.

“In California, we can see the wildfires happening just around the corner. The wildfires are being intensified by the climate crisis,” Thunberg said. “But it’s not just here. Everywhere around the world we can see these horrible environmental impacts that countless people are suffering and dying from. Right now, we are living at the beginning of a climate and ecological breakdown, and we cannot continue to look away from this crisis anymore.”

Thunberg received international attention in September when she spoke at the United Nation’s Climate Action Summit, calling for more action on climate change by government leaders. Her visit to Los Angeles occurred during a tour of the United States in which she called for more steps to address environmental problems.

Although she did not meet with the council members, Koretz attended the rally and used the moment to further efforts to address climate change at the local level. He also highlighted the importance of engaging youth in the fight.

“In honor of Greta Thunberg’s visit to Los Angeles, and especially in honor of all our local students and youth climate strikers whose futures depend on us, Councilmember Krekorian and I introduced aggressive new climate legislation,” Koretz said. “Its aim is to ensure the city’s contractors and subcontractors all meet or exceed the city’s climate emergency goals to prioritize reducing greenhouse gas emissions and toxic pollution to zero as soon as possible.”

“As a result of this motion, the city can use its extensive purchasing power to reduce greenhouse gases and address the climate crisis,” Krekorian added.

The motion includes suggestions for placing new requirements in future contracts. They include pre-qualifying contractors that minimize or otherwise offset emissions, or achieve negative emissions through drawdown; create bid requirements that prioritize the use of all-electric and zero-emission equipment; and scoring bidders during the evaluation process on their commitment and implementation of approaches for environmental protection. Other suggestions include implementing a package of emissions reductions, offsets and carbon drawdowns into bid requirements, and providing performance incentives and other recognition for contractors achieving emissions reductions above minimum standards. The city will also look at creating a facility certification process and hiring expectations for fossil fuel companies that would pair them with green industry partners to increase green jobs.

The motion will be considered next by council committees, and the dates for hearings have not been scheduled.

City officials said they were inspired by the climate strike and the commitment young people are making to address the issue.

“Greta is inspiring young people everywhere to fearlessly demand that we act with conviction, courage and vision to save the planet, because as bold as we have been in the work of reducing carbon emissions, it has not been enough,” Los Angeles Mayor Eric Garcetti said in a statement. “The students lifting their voices know the future belongs to them, and this is a moment for leaders to listen to their call and stand with the movement to embrace science, move with urgency and put a stop to global climate change.”

“I was excited to be there to listen to the fears, thoughts and demands of Greta Thunberg and more importantly, the empowered and inspired youth of Los Angeles who share my very real concerns about the climate catastrophe that is worsening seemingly before our eyes,” Koretz added.

Bringing wildlife back to WeHo