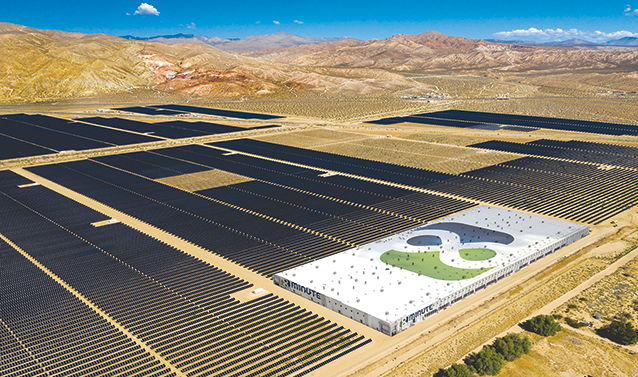 A rendering shows the new solar facility that will provide enough power for 283,330 homes by the end of 2023. (photo courtesy of Mayor Eric Garcetti’s Office)

“We are entering a make-or-break decade for the preservation of our planet, and L.A. is leading the transition to a low-carbon future that will combat the climate crisis, create new clean energy jobs and keep the lights on without relying on dirty fossil fuels,” Garcetti said. “The Eland Solar and Storage Center will provide renewable energy to nearly one million residents, even when the sun isn’t shining, and play a pivotal role in powering our progress toward a more sustainable future.”

“Eland Solar and Storage Center will offer reliable, cost-competitive energy as we expand solar and other renewable resources to meet our aggressive climate change goals,” LADWP General Manager Martin L. Adams said. “Among other benefits, the project will bridge the gap between day and night, dramatically increasing the operational value of the project.”

The Eland Solar and Storage Center will be LADWP’s first utility-scale, integrated solar and battery project engineered to provide fully dispatchable power to customers in the evening and night hours, reducing reliance on natural gas when renewable energy is unavailable.

Located on 2,650 acres in Kern County, California, the project will include two large-scale solar facilities that will capture 400 megawatts of solar energy and store up to 1,200 megawatt-hours of energy, all of which can be distributed to meet peak demand. The site will hold enough energy to power 283,330 homes.

The Eland project will be built in two phases. It was selected out of a pool of 130 proposals because of its scope and competitive price, which includes a fixed cost of less than 2 cents per kilowatt-hour for solar power, the lowest price offered in U.S. history. Independent solar project developer 8minutenergy will cover all costs associated with the development, maintenance and operation of the facility.

The project is expected to begin commercial operation no later than Dec. 31, 2023.