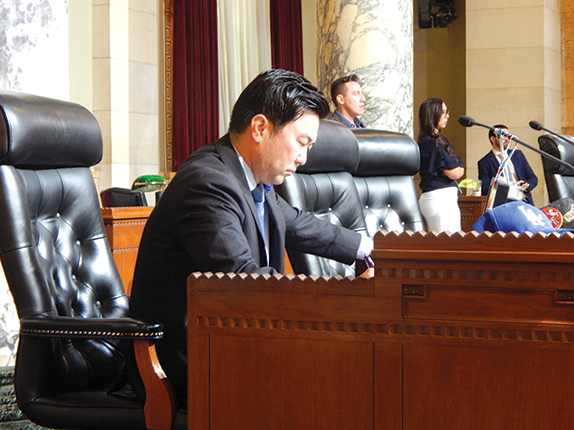 The other proposal, one supported by the Los Angeles City Ethics Commission, will need more study because it will require the Ethics Commission to build a database, which could be costly and time-consuming, the committee members said.

The committee also expressed concerns over the other portion of Ryu’s proposal, a ban on behested payments – donations to nonprofit and governmental groups made at the request of an elected official – and how that would impact charities and nonprofits.

Harris-Dawson said the nonprofit sector was the biggest part of the economy in his district in 2010. Now, some nonprofits are reporting that they are losing donors because the donors wish to avoid the appearance that their giving is connecting to their relationships with Harris-Dawson, the councilman said.

“That’s the other side of the proposal that I think needs a really, really hard look,” Harris-Dawson said. “In this day and age, the last thing I want to be a part of is anything that takes resources away from poor people, frankly, no matter what the reason is.”

During the meeting, Ryu, who does not sit on the Rules Committee, asked his council colleagues to move forward with his proposal to “change how businesses is done in City Hall” in order to regain the public’s trust. In a statement after the committee’s vote, Ryu expressed disappointment that the behested payment portion was not moving forward.

“Since my first day on City Council, I have pushed this body to implement broad campaign finance reforms and restore trust in City Hall,” Ryu said. “Although it’s remarkable how far we’ve come since I first began fighting for these reforms, we have not gone far enough. Delaying the passage of behested payment reform is a mistake and will only continue to erode the public’s trust in our city government. We need full campaign finance reform, and we need it now.”

In the meeting, Wesson said the council has made progress in increasing fairness and transparency, and he believes “we will continue to do that.” He added that he believes the part of the proposal that is moving forward is likely to be enacted.

Ryu spokesman Mark Pampanin said Ryu is confident that the council’s proposed developer contribution ban will be considered by the full City Council before the winter break so that the ban can be in effect for the 2022 election cycle.

“This is not the last step, this is the first,” Pampanin said.