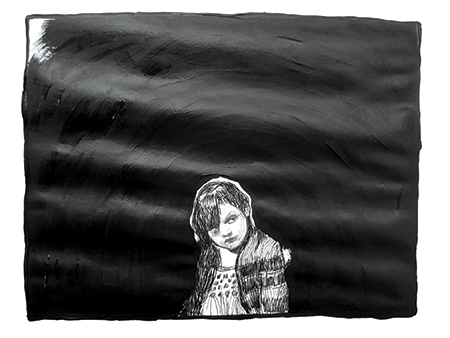 Crosthwaite was selected from 46 finalists and over 2,600 entries and received a cash award of $25,000 and a commission to create a portrait of a notable living person for the museum’s permanent collection. Finalists in this year’s competition came from 14 states, Washington, D.C., and Puerto Rico. The winners were announced at a press preview at the National Portrait Gallery on Oct. 25.

Crosthwaite’s winning entry, a stop-motion drawing animation titled “A Portrait of Berenice Sarmiento Chávez,” will be presented at the National Portrait Gallery.

“A Portrait of Berenice Sarmiento Chávez” is part of a new series of videos by Crosthwaite that illustrates the collective memories and oral stories from the Tijuana-San Diego, U.S.-Mexico border. This three-minute video depicts the immigrant experience of Berenice Sarmiento Chávez as personally told to the artist. It describes her trials and tribulations as she dreams of crossing into the United States to take part in an “American dream” and lives through an intense ordeal that ends with her deportation to Tijuana. Yet, she continues to dream of returning to the United States.

“We are defined by the stories that we tell ourselves,” said Crosthwaite, “either real or imagined, to deal with difficult situations in our lives. The story of Berenice, as I interviewed her, had elements of exaggeration, perhaps even fantasy, but it also speaks to universal truths about the disenfranchisement and vulnerability of immigrants and the violence that is prevalent against women in the U.S.-Mexico border. Rather than playing the role of journalist where I recount a factual event, I have left the video open to interpretation, just as Berenice left me with her vague and unsettling story.”

Luis De Jesus Los Angeles has represented Crosthwaite for nearly a decade and has presented four solo exhibitions by the artist, including “Tijuanerias,” “Studies for Carpas,” “Tijuana Radiant Shine” and “Shattered Mural,” and, opening on Nov. 9, “TIJUAS! Death March, Tijuana Bibles, and Other Legends.” The exhibit will feature four animated videos and hand-drawn artist’s books from the “Tijuana Bibles” series, as well as a 25-foot drawing-mural titled “Death March.” This will be the first time that this work is presented since it was created in 2011 and exhibited at the Chicago Cultural Center.