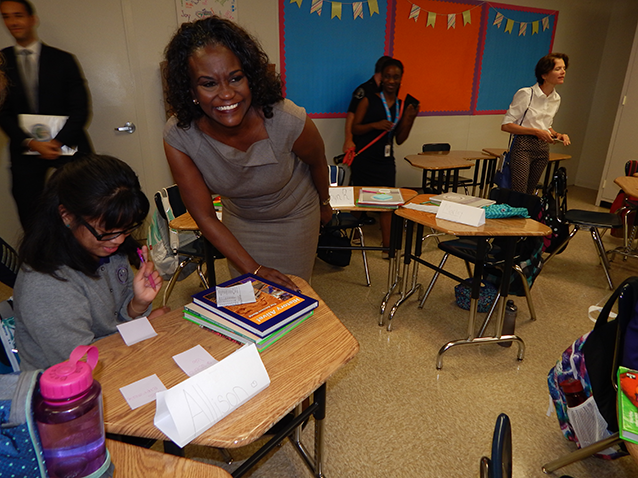 Former LAUSD Superintendent Dr. Michelle King, who championed the school, toured GALA during the first day of classes in 2016. (photo by Edwin Folven)

In its four years as the first public all-girls STEM school in Los Angeles Unified School District, the Girls Academic Leadership Academy has instituted programs for six sports, and is hoping to add a seventh next school year.

GALA Founder and Principal Liz Hicks wrote proposal for the school, located on the campus of Los Angeles High School, over three years with encouragement from friends like former-LAUSD superintendent Michelle King, whose name was added to the school after she died.

“I began to see what an all-girls education can do,” Hicks said. “Why can’t [the public school system] do this? We should be able to.”

Furthering this school of thought, the same principle was applied to sports. “As long as you have enough students to field a team, I’m fine with that,” Hicks said.

Friends of GALA, a nonprofit run by GALA parents and community members, raises money for arts, sports and other school programs. It will host its first pancake breakfast, market and community fair on Nov. 16 to fundraise for sports equipment.

Vernoice Kissaine, FoGALA’s board advisor and parent of GALA students, said that fundraisers help cover the gaps existing outside of what LAUSD can financially provide.

“We have soccer and the only reason we have enough soccer balls for practice is because the coach is someone who has teams on the side,” Kissaine said.

Despite the growing pains, Hicks said that the academy’s has a wait list for sixth through 12th grade. “It kind of proved that this is something the city needed,” Hicks said.

Part of the school’s mission, as listed on their website, is instilling the core values of excellence, leadership and wellness throughout the school.

According to Kissaine, students discuss overall wellness during certain advisory periods, including staying balanced both mentally and physically.

“I think it makes them happier students,” said Kissaine, whose daughter runs on the cross country team. “The more sports we have, the more girls we’ll have that are well-rounded.”

Tickets for the breakfast are $5 for fifth grade students and under, and $10 for all other attendees.