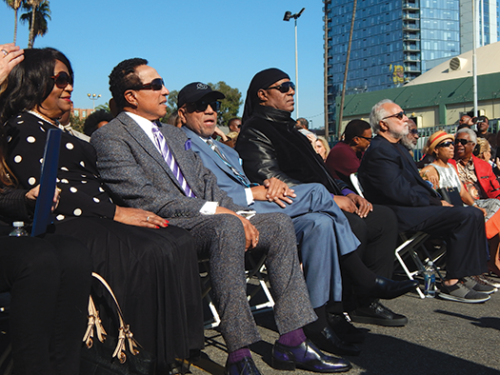 Smokey Robinson and Stevie Wonder join their friend Berry Gordy, center, and watch the ceremony at the intersection of Sunset Boulevard and Argyle Avenue, which was dedicated as Berry Gordy Square. (photo by Morgan Keith) 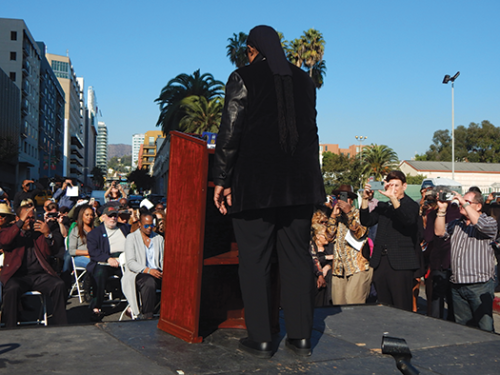 Stevie Wonder addresses the crowd at the Berry Gordy Square dedication and thanks Berry Gordy for his role in his music career. (photo by Morgan Keith) 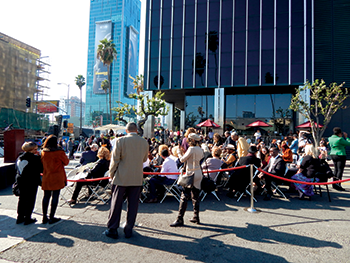 Attendees gather outside the former home of Motown Records for the dedication of Berry Gordy Square on Monday, Nov. 25. (photo by Morgan Keith) 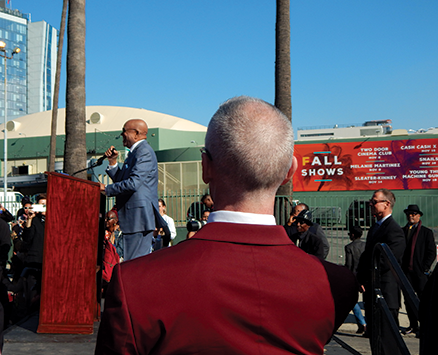 A crowd of approximately 200 people converged on the intersection of Sunset Boulevard and Argyle Avenue for its dedication as Berry Gordy Square, with many attendees dancing to Motown music that played over the event’s speakers.

Formerly located at the intersection, Motown Records was relocated from Detroit in 1972 so its artists could reach their full potential, according to its founder, Berry Gordy.

“As a kid growing up on the east side of Detroit, Hollywood was an unattainable, mystical fantasy; a place of sunshine and beautiful people; movies and movie stars; where magic happened and dreams came true,” Gordy said. “Our offices were right here almost 50 years ago, and doors did open up for my artists and me.”

Artists who began their careers under Gordy and the Motown Records label include Marvin Gaye, Diana Ross, Smokey Robinson and Stevie Wonder, the latter of who were in attendance.

Through the label, the artists’ records reached households all across the country, including those of several Los Angeles City Council members.

“[For] a kid growing up in rural Oklahoma in the 1960s – that’s me – Motown, when I first heard it, was so relevant,” said Councilman Mitch O’Farrell, 13th District, who represents the area where Berry Gordy Square is located.

O’Farrell wasn’t alone. During his speech at the ceremony, City Council President Herb Wesson, 10th District, recalled growing up in Cleveland – a few hours from Motown Records’ original home in Detroit – slow dancing to love ballads by Motown groups like The Temptations.

Wesson also emphasized that most of the event’s attendees were people of color.

“What Mr. Gordy did was he inspired women and inspired minorities to believe that they could do anything. What is more important than that?” Wesson said.

Councilman Marqueece Harris-Dawson, 8th District, expanded on this theme, stating that getting Gordy’s story out to Angelenos is “important to the lifeblood of our city.”