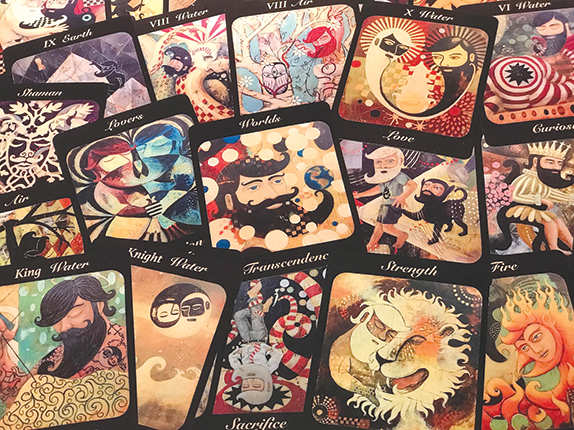 The city of West Hollywood has debuted a new exhibition of artworks by Doug Hammett at the West Hollywood Library called “Journey of the Bearded Tarot.”

Images in the exhibit are the artist’s interpretation of the traditional tarot deck. They serve as momentary guides, giving the participant a new perspective on the past, present and future, revealing hidden gems that might normally remain hidden from view.

“Journey of the Bearded Tarot” will be on display until Jan. 14, 2020, at the West Hollywood Library, located at 625 N. San Vicente Boulevard, during regular library hours.

The traditional tarot deck is a collection of 78 illustrated cards, speculated to have originated in the 15th century. On the surface level, the decks were used as playing cards for mere entertainment. Yet under closer inspection, the illustrations reveal a profound archetypal language, speaking to a universal story of humankind’s heroic journey to find meaning in this complex universe.

Hammett has been an artist for 35 years, working primarily in painting, sculpture, theater and music. He has an MFA from Art Center College of Design, and a bachelor’s in fine arts from the University of Redlands. He serves as a director for Art 105 based in Old Town Pasadena and the Arts District of LA, a center for exploring art, music and theater.

For information, visit weho.org/community/arts-and-culture/journey-of-the-bearded-tarot or doughammett.gallery, or contact Mike Che, the city’s arts coordinator, at (323)848-6377 or mche@weho.org.