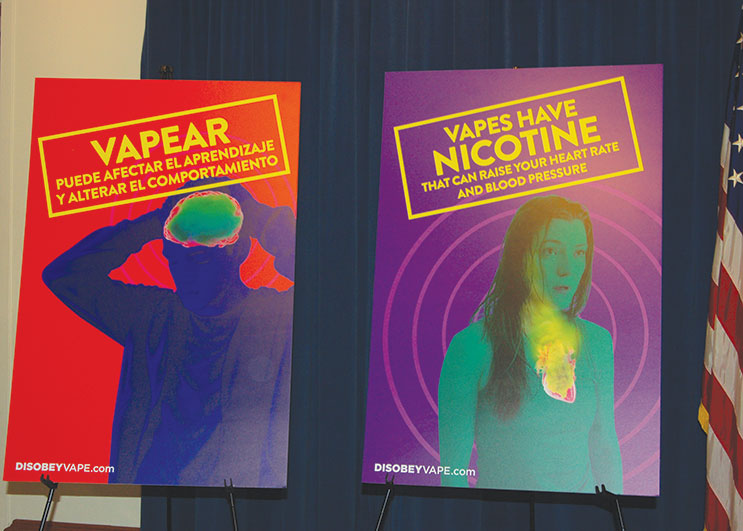 The Los Angeles City Attorney’s Office has launched a campaign to raise awareness about the dangers of vaping among youth. (photo by Edwin Folven)

Following the diagnosis of more the 800 cases of lung injury and 17 deaths nationwide that the Centers for Disease Control and Prevention attribute to vaping, local authorities are warning about the dangers of e-cigarettes and are focusing on education.

Feuer and Becerra said vaping, particularly among young people, has skyrocketed in recent years. With the recent lung injuries and deaths, they said the message is clear: “stop vaping now.”

“The vaping industry is reaping profits, but it’s our kids who pay the price by putting their health on the line,” Feuer said. “We’re in the midst of a vape-centered public health emergency with 20% of high-schoolers vaping and a crush of vape-related illness and death whose primary victims are young people. The vaping industry tries to mask these risks with kid-friendly flavors and celebrity marketing, but it won’t get away with it. If the industry won’t tell the truth about the chemicals vapers inhale, the risks of asthma and cancer, and the increased likelihood vapers will start smoking traditional cigarettes, we will.”

“We are facing a public health crisis that must be addressed from all angles,” Becerra added. “The California Department of Justice’s Tobacco Grant Program provides cities and local governments across California with the resources to combat the rise of tobacco use amongst minors. We are proud of the campaign the city of Los Angeles is launching to educate communities on the negative impacts of vaping.”

Feuer and Becerra unveiled posters from the “Your Body Knows” campaign and outlined statistics provided by the CDC, which estimates that teen e-cigarette use increased by 78% from 2017 to 2018. The authorities also pointed to a study published in the Journal of the American Medical Association stating that children who vape are four times more likely to start smoking cigarettes.

Feuer also reiterated the regulatory approach his office is taking toward vaping, including calls for a prohibition on the sale of flavored tobacco products, including traditional cigarettes and chewing tobacco as well as e-cigarettes. The Los Angeles City Council is currently considering a ban on flavored tobacco based on a motion authored by Councilman Mitch O’Farrell, 13th District, that is scheduled to soon be considered in a council committee. The Los Angeles County Board of Supervisors approved a ban on flavored tobacco product sales on Oct. 1 in unincorporated areas of the county. The county ban will go into effect at the end of the month, and retailers will have 180 days after that to comply.

The Los Angeles County Department of Public Health on Sept. 26 warned people to stop vaping until the specific cause of the lung injuries and deaths is determined. The CDC is currently investigating the outbreak. Although the cause is unknown and the lung injuries and deaths have not been linked to a specific product or brand, the CDC reported that a majority of the cases (77%) involved people vaping products exclusively containing THC, the chemical found in cannabis. Approximately 57% of people diagnosed with the injury reported using e-cigarettes with nicotine, with 16% stating they exclusively vaped tobacco products as opposed to cannabis.

The investigation has focused on black market vaping devices that likely have been filled with an unknown mixture of chemicals. Those devices are commonly sold on the street and are appealing because they cost much less than those sold by licensed retailers.

Many school districts throughout the state have increased efforts to educate students about the dangers of vaping, including the Los Angeles Unified School District. The district is partnering with the Los Angeles County departments of Public Health and Mental Health on establishing “Student Well-Being Centers” at high schools in the near future where health educators and mental health counselors will provide students with personalized support regarding vaping and health issues. LAUSD is also examining new programs for middle school students to prevent substance abuse and vaping.

“The impact on the students and communities we serve, totaling nearly five million people, is very real,” LAUSD Superintendent Austin Beutner said. “Los Angeles Unified is taking action to inform students of the dangers and is looking at other options to better protect them against this health crisis.”

Sgt. Rudy Perez, spokesman for the Los Angeles School Police Department, said vaping and e-cigarette use among students is a major concern. Like all tobacco usage on campus, vaping is not permitted on campuses. Students caught vaping and smoking are addressed with administrative measures that include contacting parents and directing students to resources that can help with smoking cessation.

“We are taking an approach to educate, educate, educate,” Perez said. “The sooner you can reach students, the better so you can take steps to help them stop. It’s something we are very concerned about.”

The Beverly Hills Unified School District is addressing the dangers of youth vaping and smoking in multiple ways, said BHUSD spokeswoman Rebecca Starkins. The district is working with the Los Angeles County Office of Education and is using posters in every classroom illustrating the dangers. The BHUSD is also holding school assemblies and informational events on vaping and tobacco use at the city’s high school and middle school, and staff on campuses regularly check restrooms, locker rooms and stairwells to ensure students are not vaping or smoking. The district plans to continue working closely with the Beverly Hills Police Department and the city of Beverly Hills on the issue, Starkins added.

Immaculate Heart High School and Middle School, located near Western and Franklin avenues, has representatives of the nonprofit organization Freedom from Chemical Dependency visit the campus each year to disseminate information on substance abuse prevention, and vaping has been addressed.

“We believe arming students and parents with accurate information is the best way to combat this problem. Whenever possible, we reinforce our stand against vaping, especially in light of recent vaping-related deaths and injuries,” said Callie Webb, director of communications for Immaculate Heart. “The school recognizes that student vaping is a widespread concern everywhere. As a result, we have sought to educate both students and their families about the dangers of vaping and how it affects developing brains.”

Feuer said the educational efforts regarding vaping by his office will continue and added that the best way to combat the recent emerging health crisis is for people to stop vaping and using tobacco immediately. He directed people seeking information to visit disobeyvape.com.