‘Terminator’ gets a welcome refresh 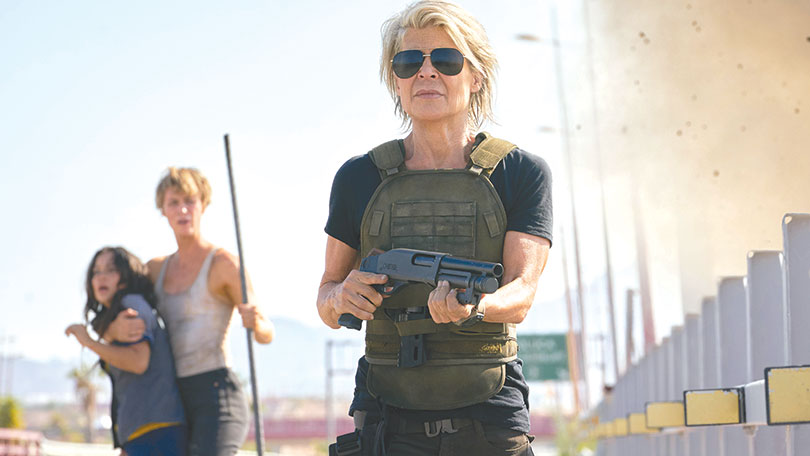 Four attempts later, the “Terminator” franchise finally comes close to replicating the glory days of old school “Terminator.” All it took: getting James Cameron back on board as producer (which doesn’t mean as much based on his other non-directed projects like the drab “Alita: Battle Angel) and, more importantly, Linda Hamilton reprising the iconic Sarah Connor, damsel in distress turned incomparable action heroine. At 63, she doesn’t miss a beat, fighting alongside two other stellar women. It’s about time.

Meet Grace (Mackenzie Davis), a soldier from the future enhanced with cybernetic parts and ready to protect young Dani (Natalia Reyes) from terminators sent by Legion. Remember Skynet (a much catchier name), the tech company from “Terminator 2: Judgment Day” that would inadvertently manufacture humanity’s demise? That timeline is no more, but aggressive A.I. is an eventuality, not a cautionary tale.

When Sarah enters the fight, her legacy might be erased, but decades of combat, military and survivalist training come in handy for a couple confronting impossible odds. They need all the help they can muster once Rev-9 (Gabriel Luna), a new kind of Terminator, targets Dani for reasons TBA.

Props to the film for jumping in. Resisting the allure of bloated backstory and delayed action, Dani and Grace encounter each other within 15 minutes, and the rest is a satisfying action ride, blocked by the addition of unique encounters, from Sarah to an old T-800 (Arnold Schwarzenegger), who goes by the name Carl.

And hey, Schwarzenegger is back, even adding a new layer to what artificial intelligence can become. Certainly, for the casual “Terminator” fan, this character’s arc might appear to jump the shark, but it actually draws upon headier sci-fi fodder established in the wildly underrated Fox series “The Sarah Connor Chronicles,” which ended in cancellation, as most of the network’s best shows do.

A female-lead film should’ve happened much sooner. Both “Alien” and “Terminator” set the groundwork more than 30 years ago, and the idea that sci-fi and action franchises keep dragging their feet. Hamilton shouldn’t be a lone action star, and “Dark Fate” honors her character and crushes a couple glass ceilings to help more women share the screen. That’s what should happen in film series, even if such conscious choices anger tedious, tired, cliché, sexist manchilds.

As for setting a substantial portion of the film in Mexico (the shooting occurred in Spain … long story) or featuring Spanish-English dialogue, it helps this story rightfully expand.

Director Tim Miller (“Deadpool”) is a new face helming projects. But both his feature films, along with Netflix’s “Love, Death + Robots,” prove he knows his way around diverse genre projects. He executed Deadpool’s maiden voyage with a double-punch of humor and action. “Dark Fate” calls for a different approach, and Miller proves he understands the darker tone of the franchise, returning to the R-rated format, futuristic teases and high-octane sequences. 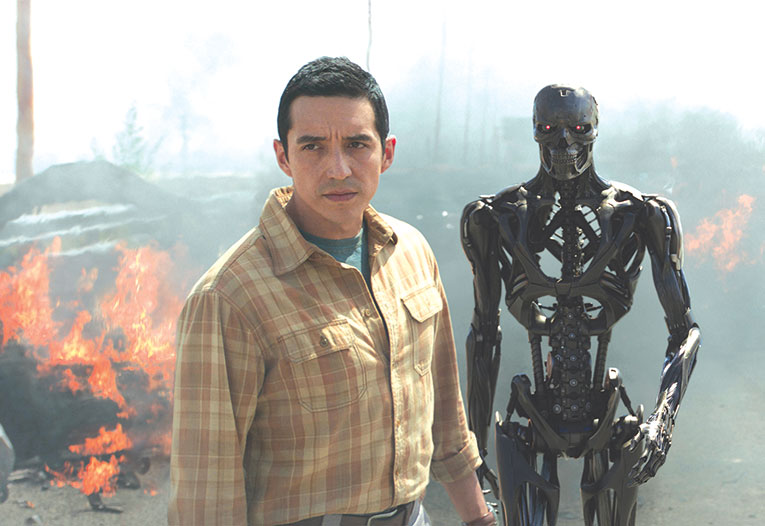 Gabriel Luna stars as Rev-9, a new Terminator in the latest installment of the film franchise. (photo courtesy of 20th Century Fox)

Speaking of new talent, Luna as Rev-9 serves the story well. Thanks to incredible visual effects, this robo-villain features new original moves, including separating his liquid exterior from the classic synthetic metal skeleton. Quite handy to accomplish twice as much during all those attempted murder scenes.

As for Luna himself, he successfully portrayed the Robbie Reyes iteration of Ghost Rider on ABC’s “Agents of S.H.I.E.L.D.” for multiple episodes – another major CGI role – and his live-action and digital performance here is a worthy predecessor of the T-1000 in “T2.” He navigates the dual identity of emotionless assassin and synthetic lifeform with ease.

Sure, the writers clearly took notes from “Star Wars: The Force Awakens,” borrowing the best and most familiar bits from the only two “Terminators” anyone need experience. Grace is Kyle Reese on futuristic steroids. Dani is Sarah with no need for a love interest. Legion is Skynet. And Rev-9 is another Terminator with the latest update. That’s OK.

Unlike, “Terminator 3: Rise of the Machines,” “Salvation” and “Terminator: Genisys,” this one has heart. That’s thanks to the heroines at the heart of this story and a reminder of what makes these films work. The “Terminator” franchise should’ve gone into the future and explored the dystopian wasteland. “Salvation” ruined that, so here we are, resetting the timeline and trying to see if more engaging stories can redeem decades of misuse. This is a promising start, so hopefully the whole crew will be back.