Sunset Strip venue gets the Go Go ahead 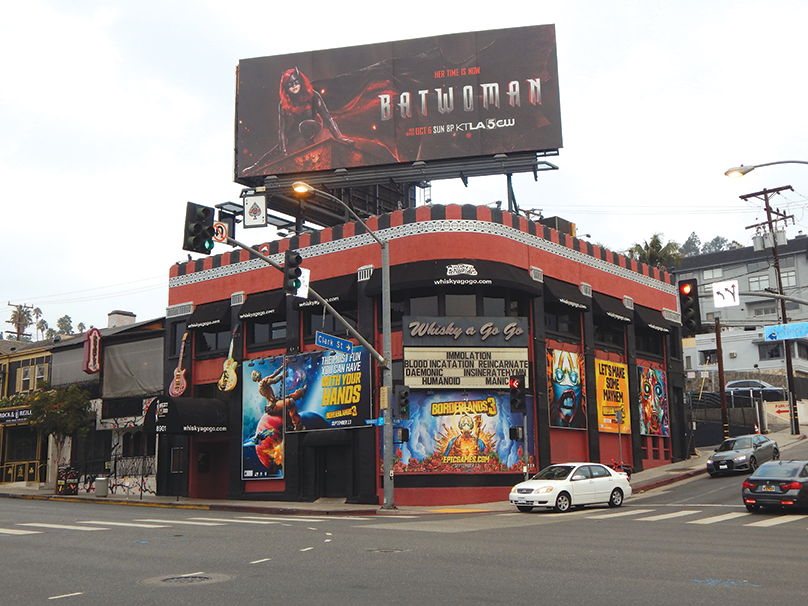 The Whisky a Go Go hosted many musicians who are now in the Rock and Roll Hall of Fame. (photo by Cameron Kiszla)

After a few weeks’ delay, the Whisky a Go Go has been recommended for designation as a cultural resource.

On Oct. 28, the West Hollywood Historic Preservation Commission voted 4-0 to send the Whisky, located at 8901 Sunset Blvd., to the City Council for the final decision on potential landmark status. Vice Chair Yawar Charlie and Commissioner Lola Davidson were absent, and Chair Jacob LaJoie recused himself because he lives near the Whisky in a non-rent stabilized unit.

The Whisky was going to be considered on Oct. 2 alongside fellow applicants and Sunset Strip institutions the Roxy Theatre and Rainbow Bar and Grill. However, due to absences, a then-vacant seat and LaJoie’s recusal, a quorum could not be reached on the Whisky item, and the vote had to be continued until the Oct. 28 meeting, where newly sworn-in Commissioner Francesco Gallo allowed the commission to reach a quorum.

Some of the same speakers who advocated for the Whisky, Rainbow and Roxy earlier in the month returned to ensure that the Whisky was recommended for landmark status as well.

Heather Goers, an architectural historian for the applicant, Historical Resources Group, who presented on behalf of the applicant on Oct. 2, also returned to advocate for the building’s importance. Goers pointed out that the Whisky is not only historical because of the building’s Art Deco design and age – it was built in 1923 – but the role the club played in the history of music, especially rock ‘n’ roll.

Whisky a Go Go was opened in 1964 by Elmer Valentine, who also helped develop the Roxy and Rainbow. Before the Whisky closed in 1982 – it later reopened under different ownership – its stage hosted a who’s who of the day’s popular music acts, including the Jimi Hendrix Experience, Tom Petty and the Heartbreakers, Lynyrd Skynyrd and the Doors.

“There are so many bands of so much note, so much influence in the rock ‘n’ roll genre, that to see this building not continue to exist as it is now would be an obscenity to me,” West Hollywood resident Dan Morin said.

The Whisky also played an important role in desegregation, booking Motown acts before other Los Angeles-area clubs would allow black people to perform.

“We believe it’s one of the most important live performance venues in the history of popular music,” Goers said.

The commissioners said there was no doubt that the Whisky is the type of structure that the cultural resource designation is meant to protect, with Commissioner Edward Levin calling it “part of the city’s cultural memory.”

“If the Whisky is not a landmark for this town, we don’t have landmarks,” Levin said.

The commissioners also encouraged the applicant to seek state and federal recognition as a landmark, and Commissioner Matthew Dubin echoed the comments he made at the Oct. 2 meeting, suggesting the applicants set up some sort of historical display at their venues.

“It really is an interesting walk through the history books, and I think this is a great project and a great property to designate,” Dubin said.