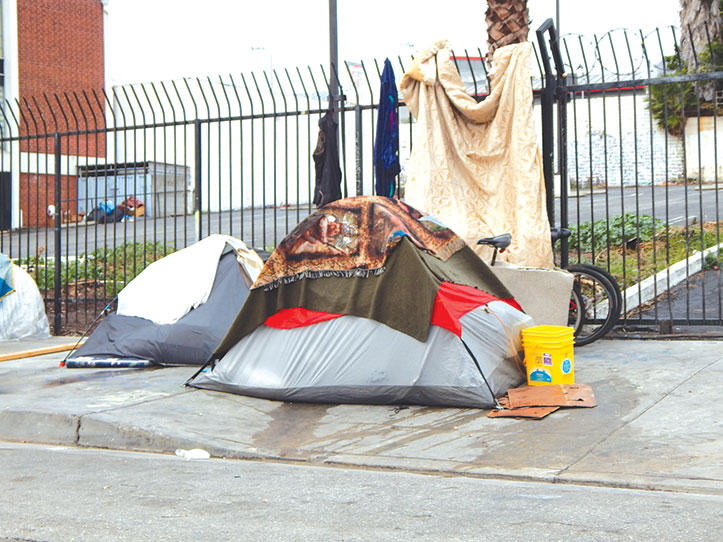 A contentious Los Angeles City Council meeting on Sept. 24 is likely to lead to changes to a proposal to limit street sleeping in the city.

Councilman Mitch O’Farrell, 13th District, serves as chair of the Homelessness and Poverty Committee, which brought to the full council a proposed new ordinance to replace Municipal Code 41.18, an ordinance that prohibits people from standing, sitting or lying on sidewalks in a way that impedes pedestrians, essentially banning people from sleeping on the street.

Municipal Code 41.18 was largely ruled unenforceable in 2006 in Jones vs. City of Los Angeles, and last year, the U.S. Court of Appeals for the Ninth Circuit ruled in Martin vs. City of Boise that governments can’t criminalize homeless people for sleeping outside. However, the court ruled, some restrictions might be constitutionally permissible.

Since Municipal Code 41.18 is out of compliance with that ruling, the council wants to reform the law in a way that complies with Martin vs. Boise but also keeps the sidewalks clear.

The office of City Attorney Mike Feuer developed a proposed ordinance that included what Feuer described as the full range of options. Under the proposed ordinance, street sleeping would be banned within 500 feet of parks, schools, daycare centers, housing shelters and in “crowded public sidewalk areas,” which is likely to include tourist destinations like Staples Center.

During the Sept. 24 meeting, the raucous crowd was largely against the proposed ordinance, and O’Farrell acknowledged that the proposal sparked some controversy.

“In terms of striking that balance that we as legislators have to land on, between the needs of people experiencing homelessness and people that we hear from every day who are understandably upset, frustrated and sometimes traumatized by the conditions they observe in many of our homeless encampments, we must take an honest look at this catastrophe,” O’Farrell said.

O’Farrell invited Gita O’Neill, assistant city attorney and director of homelessness policies and strategies for the Los Angeles City Attorney’s Office, and Senior Assistant City Attorney Valerie Flores to address the council and discuss how Municipal Code 41.18 is affected by Martin vs. Boise and what the City Council could do in response to the ruling.

“It’s, at this point, a policy discussion on how you strike that very difficult balance of where people sleep versus keeping the sidewalks passable,” Flores said.

During the meeting, several council members made their positions known, and many of them said the proposal is too restrictive.

“I hope we’ll come back with the narrowest of regulations, so that all of our entities can function,” Koretz said.

“We’re putting the cart before the horse when we’re pushing on enforcement before we have enough housing and services,” Ryu said.

Several council members specifically took issue with the portion of the proposal that addresses pedestrians who are prevented from using the public right-of-way by “aggressive behavior” that includes anyone whose actions or words might cause a pedestrian to “fear bodily harm to oneself or another, or damage or loss of property,” including violent reactions due to “reasonably perceived harm.” Councilman Marqueece Harris-Dawson, 8th District, compared the proposal’s wording to the motivation behind some of the recent police shootings of unarmed civilians in the U.S.

“The idea that we would enshrine that in law and make it lawful for someone to call the police on someone simply because ‘I think they might be threatening’ ignores the reality that we live in today,” Harris-Dawson said.

O’Farrell, who is chair of the council’s Homelessness and Poverty Committee, said he plans to revise that section in particular and the rest of the ordinance as needed.

Other council members, like Councilmen Bob Blumenfield, 3rd District, and Curren Price, 9th District, said while homeless people need a place to sleep, Angelenos need to be able to use their sidewalks, too.

“We have to deal with the issues that confront us humanely … we need to be more tailored. We don’t want to have a buffer that cuts out half the city. That’s wrong … but there are times and places where the community needs to have access without being encumbered by people sleeping on a critical access point,” Blumenfield said.

The proposed ordinance was sent back to committee at the end of the discussion, and O’Farrell said producing more housing units in Los Angeles remains his top priority.

“Let’s keep building toward that goal, and let that be our focus,” O’Farrell said.

Mark Pampanin, spokesman for Ryu, who serves on the Homelessness and Poverty Committee, said Ryu “remains laser-focused on [providing housing and services], and he’ll continue to advocate that the city stay focused on them when they come up again.”

Feuer, who said he supports the restrictions on sleeping near schools and homeless shelters and is open to the park-based restrictions, said he’s against the “false choice” that city officials must focus on providing more housing and services instead of putting in place “common-sense” regulations on street use.

“I can’t say strongly enough that we are capable as a city of both assisting homeless people and, during this crisis, assuring our residents and businesses [that we] have their interests protected as well when it comes to these very sensitive locations. We can do both, and I believe that we should do both,” Feuer said.

In the meantime, Mayor Eric Garcetti said on Oct. 1 that the city has launched new CARE teams to assist with public health services for encampments, daily trash collection and mobile hygiene units “to keep our streets clean and rebuild lives.”

O’Farrell also put forth a motion on Sept. 24 to have Department of Recreation and Parks hold community stakeholder meetings in each council district to solicit feedback and help make sure parks are safe and accessible for “all park-users, housed and unhoused,” O’Farrell said.

O’Farrell also plans to receive suggestions and revisions from his fellow council members and bring the proposal back to the committee at a date to be determined.

“I’ve said all along that we need to strike the balance between making sure people experiencing homelessness receive services more efficiently and can be housed more quickly, and at the same time keep our public spaces safe, clean and accessible to everyone,” O’Farrell said. “Only the formal adoption of a policy will help us achieve this objective and for that to happen, I will need to hear from my colleagues.”