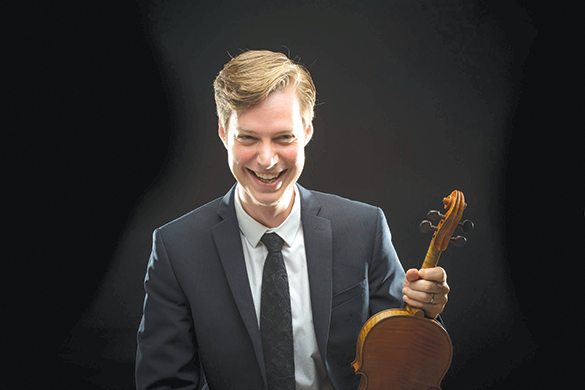 Los Angeles Chamber Orchestra’s Music Director Jaime Martín announced the appointment of Jason Issokson as second violin. Issokson, a Los Angeles resident, begins his new post with the orchestra’s second 2019-20 season orchestral concerts on Oct. 26 and 27. LACO is regarded as one of the nation’s premier music ensembles and a leader in presenting wide-ranging repertoire.

“I’m thrilled that a musician of his caliber will be joining LACO’s outstanding string section,” Martín said.

Issokson, who enjoys an active career as a soloist and chamber musician, has performed with the Fort Worth Symphony, Aspen Concert Orchestra, Waco Symphony, Kaleidoscope Chamber Orchestra, East Texas Symphony Orchestra, Great Falls Symphony, Abilene Philharmonic, Sendai Philharmonic Orchestra, Orchestra di Teatro San Carlo and the Orchestra Internazionale d’Italiae, among others. He was a founding member of the Argus Quartet, where he served as a violinist for six seasons.

His busy performance schedule has brought him to many prestigious venues and festivals, including multiple appearances at Carnegie Hall and Alice Tully Hall, as well as recent and upcoming performances at Lincoln Center’s Great Performers Series and many others. He has performed chamber music alongside some of today’s most important musicians, including pianists Leon Fleisher and Misha Dichter. Issokson’s playing has garnered a number of awards, including the top prize at the International Violin Competition, third prize at the International Alberto Curci Violin Competition and the prize for best performance of a commissioned work at the International Max Rostal Competition in Berlin. Chamber music honors include first prize at the 2017 M-Prize Chamber Arts Competiton, as well as first prize at the Concert Artists Guild Victor Elmaleh Competition. He studied with the violinist Midori at both the Manhattan School of Music and the University of Southern California.