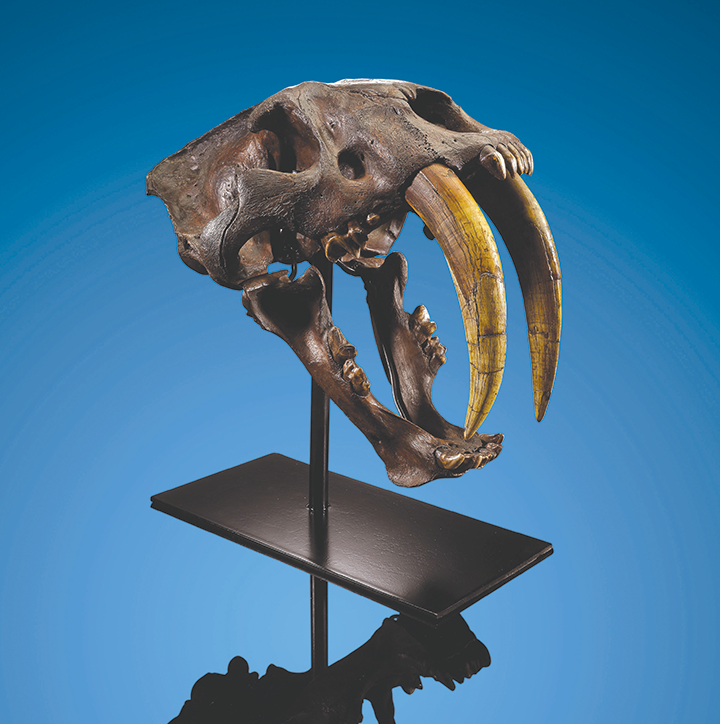 A rare fossilized saber-toothed cat skull found in the 1950s on private property on Wilshire Boulevard failed to sell during an auction that ran through Oct. 28, but the owner and auctioneer remain optimistic they will still find a buyer.

The skull, considered one of the finest examples of the extinct Smilodon species, was offered for sale in September by Heritage Auctions in Dallas. The fossil is owned by Los Angeles resident Arnold Newman, who bought it in the 1970s from a friend who found the saber-toothed cat skull in 1955 in debris from a bank construction site near Wilshire and Hauser boulevards.

The fossil was offered for $690,000, with a buyer’s premium that brought the minimum bid to $843,000. Heritage held a live auction including the skull on Sept. 28 and kept bidding open through Oct. 28. Craig Kissick, director of natural science for Heritage Auctions, said there was interest in the piece, but the offers were not large enough.

“Most of the bids were in the $400,000 range and with the structure of commission, I think it would have to be north of $500,000 to have a reachable deal,” Kissick said. “At this point, it comes back to the owner, but we are amenable to keeping it open. It’s just going to come down to the number.”

Newman said he is still interested in selling the fossil but offered no specific amount he would accept. He kept the fossil in his private collection for decades and formerly used it as a prop on an educational television show he produced in the 1970s and early 1980s.

Newman has documentation from the Natural History Museums of Los Angeles County stating that the fossil is not from their collection. Newman, 78, decided to sell it to create a financial legacy for his children and plans to explore options to see if a higher sale price can be negotiated.

“The ball is still up in the air. It’s too early to elucidate it,” Newman said. “It’s the most important Smilodon in existence. We’ll see where it goes.”

Kissick added that he will remain in contact with the bidders to see if the offers may increase.

“I intend to continue to sell it,” Kissick said. “It’s never a done deal until it’s done.”