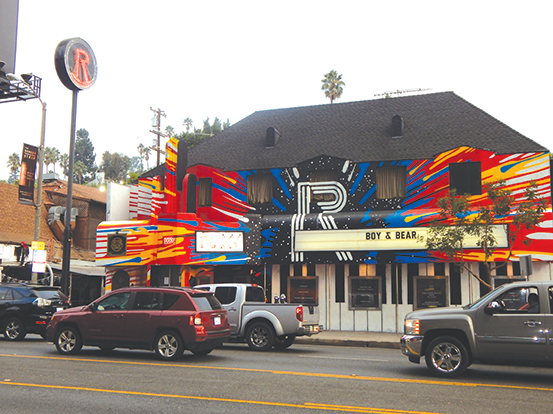 The Roxy Theatre has hosted performances by many top-tier acts, including Bob Marley, the Ramones and Frank Zappa. (photo by Cameron Kiszla)

With a pair of 4-0 votes, the commission recommended the City Council designate the Roxy Theatre and the Rainbow Bar and Grill – located adjacent to each other at 9009 and 9015 Sunset Blvd., respectively – as local cultural resources. Vice Chair Yawar Charlie and Commissioner Gail Ostergren were absent, and one seat on the seven-member commission remains vacant after the resignation of former Commissioner Christopher Winters in September.

The two buildings were proposed for landmark status by the Historic Resources Group, which also expected to see a third Sunset Strip building, the Whisky a Go Go at 8901 Sunset Blvd., be voted on. However, Chair Jacob LaJoie had to recuse himself from that item, as he lives within 500 feet of the establishment and does not live in a rent-stabilized apartment. Without LaJoie, the commission did not have a quorum, and the Whisky vote was delayed to a future meeting.

The commission did receive public comment on the Whisky, as well as the Roxy and Rainbow, as many in attendance came to speak about all three venues that played large roles in music history dating back to before West Hollywood’s founding in 1984.

The two-story Roxy, built in 1936, has seen significant changes over the years. In 1938, it opened as the Westside Market, but in 1956, the building was converted into a nightclub called the Largo. In 1973, a group of record executives opened the Roxy with three nights of performances by Neil Young. Its stage also featured performances from the likes of Bruce Springsteen, Linda Ronstadt, and the Temptations, and the American premiere of the live production of “The Rocky Horror Picture Show.”

The Roxy was able to attract such talent because it catered to the artists with the “best of everything,” from sound systems to dressing rooms, said Heather Goers, an architectural historian with the Historical Resources Group.

“It was, as [record executive and Roxy co-founder Lou Adler] said, designed to be the best rock ‘n’ roll club that Los Angeles had ever seen,” Goers said. 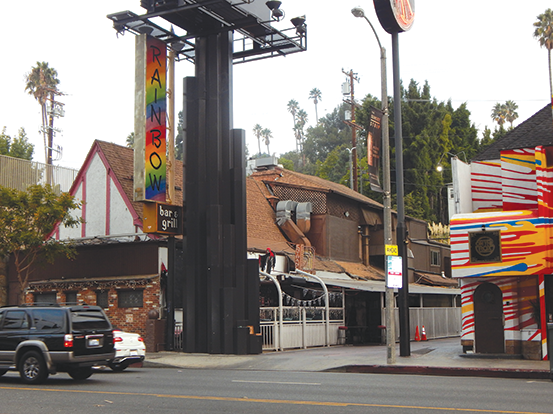 The Rainbow Bar and Grill has long been known as a hotspot for rock ‘n’ roll musicians. (photo by Cameron Kiszla)

“It was envisioned by band manager and public relations executive Bob Gibson, who wanted to establish an exclusive restaurant that catered solely to the excesses of rock ‘n’ roll,” said Doug Vu, senior planner for the city of West Hollywood and liaison to the Historical Preservation Commission.

Goers said the hard-partying history of the Rainbow is a big part of what makes the building worth recognizing as a historical landmark.

“The uniquely – shall we say – exuberant character of events at the Rainbow does not in this case, I think, diminish the significance of the building and its history but rather enhances it, because the Rainbow occupies a singular, distinctive position in the history of the Sunset Strip,” Goers said.

During the public comment portion of the meeting, many of the speakers recounted the bands they’d danced to and the parties they’d experienced at the Sunset Strip venues. They also spoke of the impact the Roxy, Rainbow and Whisky had on making the Sunset Strip as well-known and iconic as it is today.

“It’s rare for a city to come to being with so much history. West Hollywood is one of those lucky cities. This city is so fortunate to be able to claim that history as its story, and these three venues are a very big part of that story,” said West Hollywood resident Sheila Lightfoot.

Beyond the particulars of which bands the commissioners and speakers had enjoyed during their trips to the Sunset Strip, the meeting did not contain much debate. However, the commissioners encouraged the applicants to pursue recognition at the state level and do something on the properties to keep the history alive.

“I think it would be compelling to for the general public who may not know how rich the history of these [properties] are,” Commissioner Matthew Dubin said. “So whether it’s a wall or, these days, there’s a lot of things you can do electronically with a kiosk or something like that, that would be a nice addition to the venues.”