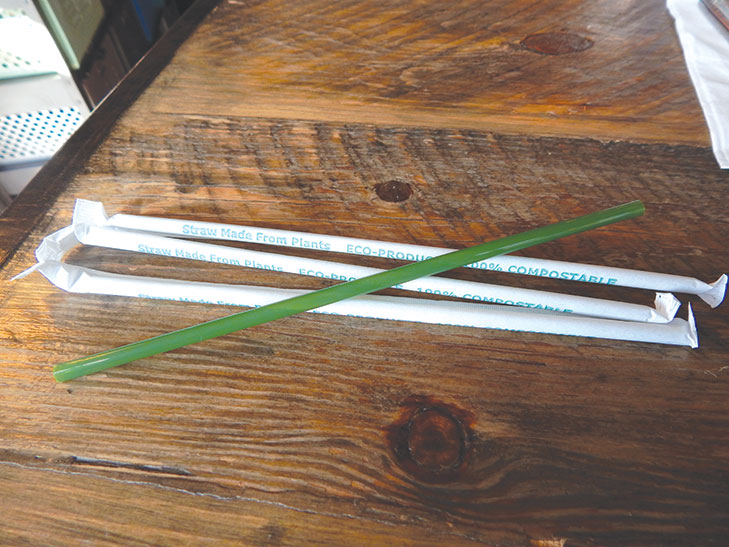 The 100% compostable straws used at Met Her at a Bar café are almost identical in use to plastic straws, yet are made from plants. (photo by Kate Dietel)

The second phase of Los Angeles City Councilman Mitch O’Farrell’s Plastic Straws on Request ordinance went into effect on Oct. 1 for all food establishments with 25 or fewer employees. Enforcement of the ordinance will be geared towards education before fines will be implemented, now affecting 35,000 city food establishments.

Both the state and Los Angeles County have also adopted a single-use plastic straw policy. The city’s ordinance takes an additional step by requiring food establishments, including fast food and sit-down restaurants, food trucks and carts and smoothie and coffee shops, to withhold plastic straws unless a customer requests one. In drive-thru restaurants, the customer will be notified to ask for a straw.

The first phase of the ordinance went into effect on April 22 (Earth Day) for businesses with 26 or more employees after it was approved on March 1. The law attempts to stop single-use plastic waste from littering beaches and waterways. Los Angeles is the largest municipality in California to go above and beyond state requirements for addressing plastic straw pollution.

With all 35,000 food establishments now facing enforcement of the ordinance, O’Farrell, 13th District, is hoping for an incentive-driven response from businesses.

“I have a strong sense that there is a real desire collectively across all sectors of society, especially in the consumer world, to not harm the environment with our choices,” O’Farrell said.

Enforcement of the ordinance will be primarily based on complaints and will focus on educating the businesses before citations or fines occur. The first two complaints will result in verbal warnings for a business, and a third complaint will result in a $25 fine.

“If I go to a coffee house or a smoothie place or wherever I may be, if the straws are out, I am simply going to remind them that the ordinance is in place and that they can take action and here is what it means,” O’Farrell said. “We will continue working with businesses like we have been.”

The next step of the ordinance is for the Bureau of Sanitation to collect a report and present it to the Energy, Environment and Social Justice Committee to begin discussions on potentially phasing out straws entirely by 2021, O’Farrell said.

“This Straws Upon Request ordinance really prepares all food establishments for that eventuality … It sends a signal that all single-use plastics are probably going to be on their way out sooner rather than later,” O’Farrell said. “There has been this consciousness already, and dozens and dozens of restaurants I have been to now offer paper straws only. A lot of businesses are already getting in the act.”

“It is a little bit less durable, but it is otherwise going to do the job exactly the same,” said Jake Smith, a shift supervisor at Met Her at a Bar café. “It was a way to be as eco-friendly as we possibly can.”

Smith expressed support of the plastic straw ordinance, though it was not a reflection of the restaurant’s stance.

“I think it is a good step forward into trying to make things more environmentally conscience because plastic straws are a huge reason why we have a lot of pollution, especially in the ocean,” Smith said.  “This [ordinance] is a nice middle ground where you can [say] ‘People need straws. They want straws. Let’s make it so that it is more consumer friendly and also eco-friendly.’ It’s a win-win situation.”