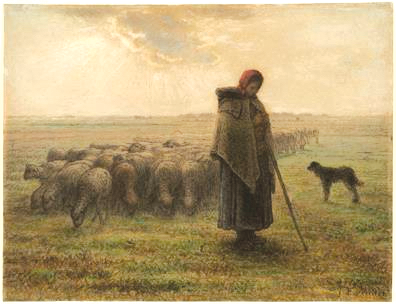 “Shepherdess and Her Flock” is a mid-18th century black chalk and pastel piece by Jean-Francois Millet. (photo courtesy of the Getty Museum)

A new exhibit, “Peasants in Pastel: Millet and the Pastel Revival,” explores the circumstances of artist Jean-François Millet’s turn to pastels and will present a selection of work by pastellists from the subsequent generation who drew inspiration from his example: Camille Pissarro, Alfred Sisley, Giovanni Segantini and Leon Lhérmitte.

In the mid-1840s, Millet began to paint scenes of farm workers winnowing grain, tending sheep and sowing seed, often at a grand scale conventionally reserved for subjects from classical mythology or the bible.

By the 1850s, his work had begun to sell, thanks to an arrangement with Alfred Sensier, who admired 18th-century pastels and encouraged Millet to produce small, bright, salable works in this medium. Eager to corner the market, collector Emile Gavet commissioned no fewer than 90 pastels from Millet. Millet died in 1875, and Gavet dispersed his vast pastel collection at public auction shortly thereafter.

Bringing together pastels by Pissarro, Sisley, and some of their lesser-known contemporaries, the exhibition charts Millet’s determining influence on the generation of pastellists that followed him.

“Pastels, with their velvety sheen and aristocratic associations, might seem an unlikely choice of medium for the portrayal of rural life and labor,” said Emily Beeny, associate curator of drawings at the Getty Museum and curator of the exhibition. “But by exploring the use of pastels by Millet and his followers, this small, focused exhibition encourages us all to consider how artists’ choice of medium inflects our understanding of their subject matter.”

“Peasants in Pastel: Millet and the Pastel Revival” will be on view through May 10, 2020, at the J. Paul Getty Museum, located at 1200 Getty Center Drive, Los Angeles. For information, visit getty.edu.