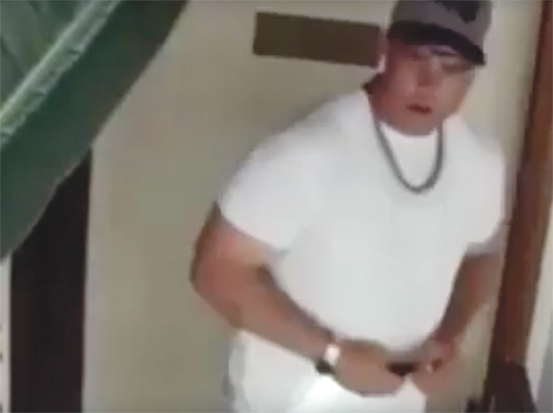 Security camera footage shows the male suspect near the front door of the residence that was burglarized. (photo courtesy of the LAPD)

Hollywood Division burglary detectives are searching for two suspects who were seen on security camera footage burglarizing a house in the Hollywood Hills on Oct. 4.

The suspects, a man and woman, were first captured on video at approximately 5:30 a.m. as they parked a late-model, dark-colored BMW in the driveway of the home in the 1800 block of North Crescent Heights Boulevard. The male suspect got out and used bolt cutters to disconnect a lock box with a key inside near the front door. The man then got back into the vehicle and the pair fled.

Approximately one hour later, the two suspects returned and the man used a key to enter the residence. The female suspect is also seen on security camera footage entering the house.

The male suspect stole a telescope, cell phone and handgun. The female suspect did not appear to take anything. They both got back into the car and fled a few minutes after entering.

The homeowner, who police described as elderly, was asleep inside the home during the burglary. No injuries were reported.

Security camera footage of the suspects can be viewed at lapdonline.org.