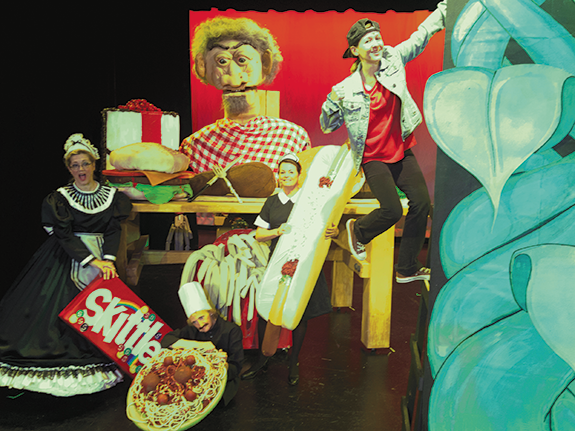 The Nine O’Clock Players continue their 87th year bringing extraordinary family theatre to Southern California with a magical musical look at the timeless story of “Jack and the Giant”, with music and lyrics by Bill Francoeur, book by Vera Morris, musical direction by Daniel Gledhill, set design by Vidas Enck, lighting design by Brandon Baruch, costume design by Steven Nielsen, technical direction by Drew Wilson and direction by Julia Holland.

The Giant has not only captured Good Queen Violet and taken her to his castle in the clouds, but he is demanding even more money from the poor people of the Kingdom below for her safe return. The villagers have nothing more to give, but with a little magic and a lot of courage, Jack ventures up into the clouds on a gigantic beanstalk to face the Giant and save the day. With singing, dancing, and fantastical characters, “Jack and the Giant” is another gorgeous production full of fun and excitement for audiences of all ages.

For tickets please call (323)545-6153 or visit nineoclockplayers.com . The Assistance League Theatre is located in Hollywood at 1367 N. St. Andrews Place.

The Nine O’Clock Players has been producing plays since 1929, and is the oldest children’s theatre company in Southern California. The award-winning NOP stages performances throughout the school year, providing live theatre for thousands of Title 1 LAUSD students. Productions are offered to school groups during the week, and to the public on weekends. Revenue from weekend performances support the NOP to offer shows and bus transportation at no cost to economically and physically-challenged children throughout the LAUSD. Built in 1938, the Assistance League Theatre is the oldest barn theatre west of the Mississippi River.