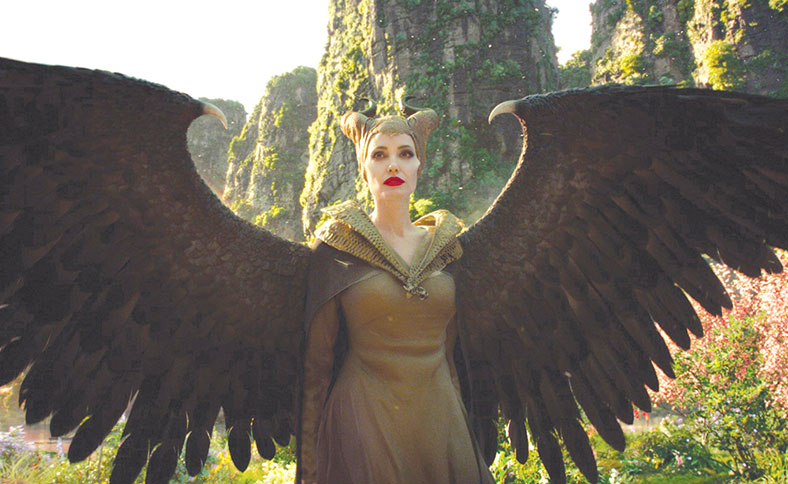 Angelina Jolie reprises her role as Maleficent in the new Disney film. (photo courtesy of Disney)

On a good day, Disney is a juggernaut of creative energy, the domineering schoolyard bully with an incredible singing voice. It’s a frustrating combination that evokes praise in one breath and fantasizing about a neck punch in the next. Marvel, Pixar, Disney Animation can do no wrong (mostly), though the growing Mouse monopoly is a matter of concern, not artistic triumph.

All those live-action adaptations of classic cartoons, however – they’re Disney’s weak spot. And “Maleficent: Mistress of Evil” marks the third creatively bankrupt reboot this year alone.

Let’s do some score keeping. All those live-action remakes include only one bonafide good film, “The Jungle Book,” though somebody out there seemed to enjoy the rather dull “Beauty and the Beast” to the tune of $1.2 billion. And that’s the problem: familiar branding will always result in big money for mediocre films.

When “Maleficent” premiered, the premise seemed unique enough: the classic story with a twist. Unfortunately, the only inspired bit of that drab affair was Angelina Jolie’s performance. What actually transpired throughout the film lacked any substance.

“Mistress of Evil” continues that trend, promising something wicked. What other purpose does that subtitle serve? Sadly, it serves no greater purpose than a faux marketing strategy. This mistress of evil has a heart and doesn’t actually do anything evil.

Of all the stories to tell, focusing on the impending nuptials of Princess Aurora (Elle Fanning) and Prince Philip (Harris Dickinson) is a real yawn fest. When Maleficent (Jolie) meets the in-laws, things go wrong, thanks to fey bigot Queen Ingrith (Michelle Pfeiffer), who plans to eradicate all non-human creatures once under Maleficent’s protection.

No amount of banter adds any humor from the fairies Thistlewit (Juno Temple), Flittle (Lesley Manville) and Knotgrass (Imelda Staunton), nor Diaval (Sam Riley), Mal’s raven who doesn’t enjoy human form all that much. And new faces, including Conall (Chiwetel Ejiofor) and Borra (Ed Skrein), do little more than prop up Mal without contributing anything substantial to these films’ world.

Perhaps “Mistress of Evil” is better than its 2014 predecessor. Conceptually, the appeal is clear: new characters, new locales, expand lore surrounding Mal. In practice, it’s all so bland. Why these boring characters and trite settings? And why pepper a deep origin into the mix without letting it truly simmer? The final scene of the film promises something more enticing, a story that boldly goes somewhere new. Any future installment, however, might be wishful thinking.

A central problem with “Mistress” revolves around a common fantasy trope: a forgotten world of magic. From “The Lord of the Rings” to “Game of Thrones,” the human world, overflowing with logic and industry, leaves no room for wonders hidden in the woods, untouched by human hands. Such stories are a gamble that can pay off big. Or they hint at a world and story far more interesting than what transpires on screen.

Enter “Mistress” and all its promise of intrigue. Instead, obligation to characters from the first film and the original animated feature remain central, even though the story would do well to mature past them. After all, at least this one proves it’s willing to alter the fate of an iconic character.

This is another missed opportunity to create the next fantasy epic. It sure wants to be that with an enormous battle sequence in the third act. And with a budget north of $100 million, this feels like something that needed more oversight.

Disney ain’t crying. With the looming premiere of Disney+, the one streaming service to rule them all, a sea of nostalgic slender and shameless direct-to-video sequels now have a home. “Maleficent: Mistress of Evil” can join that gang and feel superior for a hot second when the only other option left is “Lady and the Tramp II: Scamp’s Adventure.”