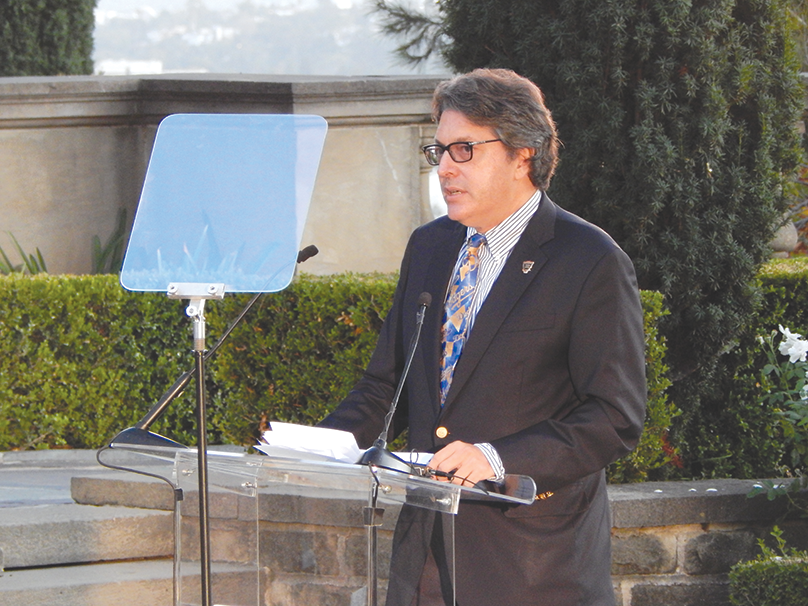 In his State of the City address at Greystone Mansion on Oct. 3, Beverly Hills Mayor John Mirisch reiterated his strong stance against the state government’s efforts to encourage the construction of large developments to fight California’s housing affordability issues.

Mirisch used a large portion of his approximately half-hour speech to decry the “Sacramento politicians” he said want to make single-family zoning illegal. Mirisch, who took over the position of mayor in March, made similar points during his installation.

As evidence of the plot against single-family homes, Mirisch cited two pieces of legislation – Senate Bill 50 and Senate Bill 330 – that would make it harder for local governments to prevent housing from being built, especially near transit centers.

Rather than throw his support behind NIMBYism – not in my backyard – or YIMBYism, Mirisch expressed support for SOOMBYism – Sacramento out of my backyard – and encouraged state lawmakers to look outside of large cities for places to build new homes, such as the Central Valley, Bakersfield and Barstow.

“Rather than attacking communities, Sacramento needs to get corporations who are making dense urban areas less livable to engage in job creation in these underserved areas. While avoiding the pitfalls of overheated job concentration in already dense areas, we would thereby also further the goals of geographic equity,” Mirisch said. “We don’t need blanket upzoning. That’s not real housing policy.”

Mirisch said “Wall Street and developers” are being put in charge of housing policy, and they’re using it as “an investment vehicle,” leading to the construction of more luxury housing units that will not help address the state’s problems with affordable housing and homelessness.

“Building more Porsches, or tonight, Rolls Royces” – a nod to the sponsor of the Beverly Hills Chamber of Commerce-hosted event – “does not reduce the price of Priuses,” Mirisch said.

“We shouldn’t be demonized; we should be looked at as a stable model of a connected, capable and caring community,” Mirisch said. “We have achieved an admirable equilibrium with a diverse cosmopolitan population, which includes over 50% renters and over 60% of our residents who live in multifamily housing. Equilibrium is a good thing.”

Aside from discussions of growth and development, Mirisch also took time to look at the progress made in his mayoral term and the city’s plans for the future. Mirisch lauded the city’s tobacco ban, which is likely to be the strictest in the country when it goes into effect in 2021.

He also discussed changes in transportation that are already underway in the city. The city is working to mitigate the impacts of construction on Metro’s Purple Line Extension, and Beverly Hills’ Complete Streets Plan, including a planned autonomous shuttle system, aims to encourage residents to leave their cars at home.

“Our goal is to develop a data-driven system that will provide on-demand, point-to-point mobility within Beverly Hills, and to work toward a system of public transportation that people actually use because they want to, not because they have to,” Mirisch said.

Among a variety of other topics, Mirisch also touched on the city’s focus on public art, the new plan for La Cienega Park and the plugging of the oil wells at Beverly Hills High School, which is expected to be done by next summer.

Mirisch concluded by encouraging the hundreds of attendees to embrace their differences and focus on decency, tolerance and kindness as a way to foster and enhance the sense of community in Beverly Hills.

“I firmly believe that community is an extension of family and home. And it is precisely because local government is a reflection of community that, when done right, it is the absolute best form of democracy,” Mirisch said.